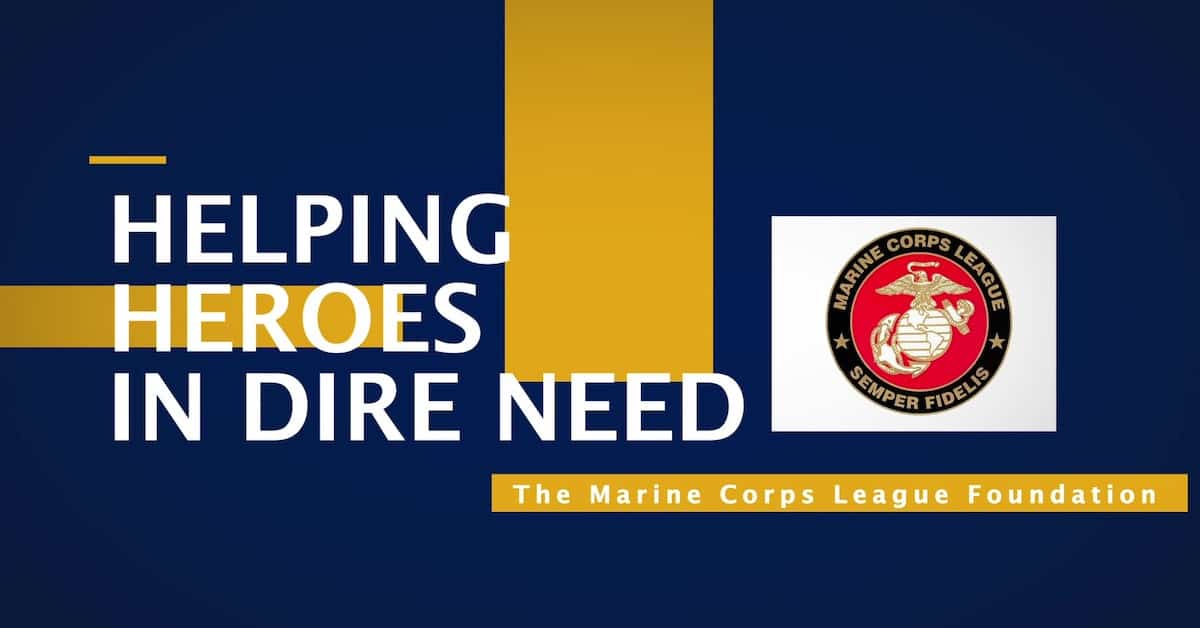 You can watch the full interview here or read the transcript of the interview below.

Jay: Hello and thanks for joining us today. I’m Jay Flynn, Homes for Heroes outreach coordinator, and I’m joined today by Bill Miller with the Marine Corps League Foundation. Laura Roman was supposed to be with us today. She’s a Homes for Heroes real estate specialist from Arizona and she had nominated the Marine Corps League Foundation, but she’s feeling a little under the weather today and we wish her a speedy recovery. So Bill, welcome.

Bill: Thank you, glad to be here.

Bill: Thank you very much.

Jay: Bill the Homes for Heroes Foundation is honored to present the Marine Corps League Foundation with a $10,000 grant and there’s your big check. Congratulations.

Jay: Absolutely. We certainly owe our gratitude to those who serve in our nation’s Marine Corps. I know there’s many, many challenges that our Marines are facing today, and we hope that this grant helps the Marine Corps League Foundation in serving those heroes.

Jay: Awesome to see you guys do a lot of different things for all different sectors of the Marine community.

Bill: Yes we do it for the Marines themselves and their families. We have various funds that we use for those, especially humanitarian aid. That is where I like to see our emphasis, because those are people in need. We find out what their needs are, and we help them out.

Jay: That’s tremendous. You’ve told us a little bit about the programs that you guys offer, so if there’s somebody watching and they want to get connected with one of those programs, can they just go to your website? How would they connect with you guys?

Bill: Yeah the Marine Corps League website is mclfoundation.org. We have a variety of different ways that people can help with direct donations. We can also do periodic donations, like every month, if they want to utilize Paypal for that. We also have a memorial certificate program. It doesn’t have to be somebody in the Marine Corps League or somebody who’s a Marine. It’s normally done for somebody who has been in the Marine Corps, associated with it, but it’s done in memory of somebody who has gone to their final destination. The whole program is listed on our website. In addition, we are also part of the Combined Federal Campaign. Our combined Federal Campaign number is 10195, so if government employees wish to participate, they can earmark their donation for the Marine Corps League Foundation with that 10195 number. That’s a great way for federal government employees to give back.

The other thing that we have are Challenge Coins. These are fund raisers.They are numbered coins (we ran out of number one and two, but we have coins three through six) that are representing some significant event. For example, the coin that was released last year was in honor of the Korean War. We’ve had others that were for other events. Next year will be another new coin that will probably be in honor of the Vietnam War.

Jay: Awesome, and that’s on your website as well.

Jay: Awesome, so tell me a little bit about some of the programs. The grant that Homes for Heroes Foundation is giving to the Marine Corps League Foundation– in general how will that be used to support our heroes?

Bill: The Marine Corps League themselves have detachments all over the country. They’re always looking for people who want to become members of or want to assist with something. For example, here in Georgia, we have I think about 20 detachments, and they do everything from participating in local parades to hosting golf tournaments to raising money for scholarships. The thing that a lot of people don’t realize is that you do not have to be a Marine to be a member of the Marine Corps League. You can be what’s called a Fleet Marine Force Corpsman, which is a Navy personnel who served with the Marines and wears the Marine Corps eagle, globe, and anchor. They’re entitled to what’s called the FMF Device. The same thing with a FMF Navy chaplain. And if you don’t meet any of those criteria, you can always be an associate member. My wife is not a veteran but she is an associate member of the Marine Corps League. There’s opportunities for anybody who wants to support the call.

Jay: Absolutely, absolutely awesome. I’ll tell you the things that you guys are doing are amazing, and it’s such a wonderful group that supports our Marines. Everything that you and the Marine Corps League Foundation do is making a huge difference in people’s lives. And I know that the heroes that you’re helping are so thankful for the help.

Bill: I would like to thank you for the opportunity to do this video, because we’re always looking for ways to get the message out about what the Marine Corps League Foundation is and what we do. We want to reach out to the community at large, not only to encourage more donations to our cause, but also for all those who might be in need.

Please take a moment to learn more about the Homes for Heroes Foundation and the grants it provides nonprofit organizations who help heroes in need, or simply to make a donation.