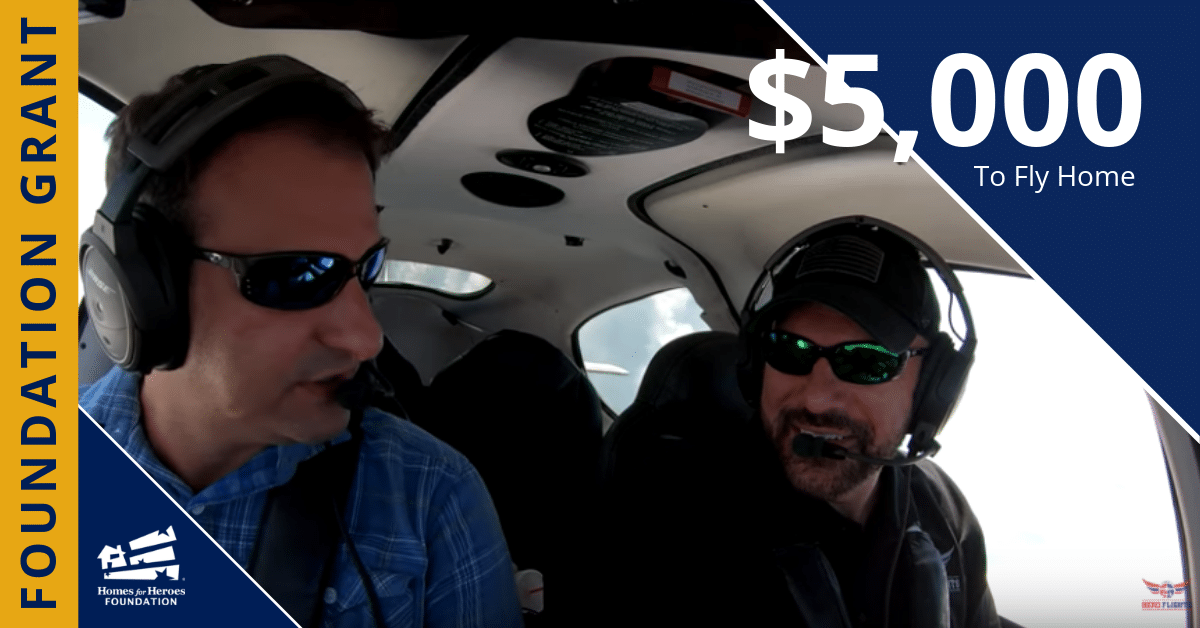 The Homes for Heroes Foundation donated $5,000 to the Veterans Airlift Command (VAC) to help finance 18 flights for service members like Sergeant Major, Ben (active duty Army Special Forces). In SGM Ben’s case, the flight allowed him to take a break from his inpatient rehabilitation in Virginia to visit his family in Florida for a few days.

Sergeant Major (SGM) Ben is active duty Special Forces, Green Beret. He has served our country for 22 years. His plan in the mid-90s was to graduate high school, join the Army and earn some money for college. SGM Ben enlisted, went through basic and eventually the Army stationed in Panama. He knew after his first year he wanted to re-enlist. So, he did in 1999. They sent him to Ft Bragg, NC and assigned him to the 82d Airborne, where he was selected to attend the Special Forces Qualification Course and began training in 2000.

Then 9/11 happened. SGM Ben spent 2.5 years in medical training and qualifications for Special Forces. He first deployed to Afghanistan in 2004. Due to his medical training, he ran clinics and managed medical situations similar to a paramedic in the states. The Afghans valued him as a doctor.

Between 2004-2013, SGM Ben served 5 deployments in Afghanistan. He was awarded two Purple Hearts for injuries sustained in 2007. He sustained shrapnel wounds to his arm and multiple shrapnel wounds to his chest, resulting in severe muscle loss. Currently he is an inpatient, receiving intensive physical and vocational rehabilitation in Virginia. But, his wife and kids are at home in Florida. This is where the Veterans Airlift Command plays their part.

The Veterans Airlift Command is a Minnesota charitable nonprofit that provides free air transportation to post 9/11 combat wounded and their families. The flights allow active duty and veteran service members to receive medical care and/or other compassionate means through a national network of volunteer aircraft owners and pilots. When America’s wounded warriors need transportation, business aircraft operators rise to the occasion through the VAC.

The VAC’s network of volunteer pilots is nearly 2,800 strong. These pilots provide the planes and fuel, not to mention they pilot the flights. The VAC coordinates 700-800 veteran flights each year consisting of over 1,800 passengers (including family members).

Chad Lacy is a pilot who runs a nonprofit called Hero Flights. Through his partnership with the VAC and an organization called Operation Hat trick he was able to fly SGM Ben to see his family. The four hour flight gave Chad some time to get to know SGM Ben and he had this to say about their conversation, “We talked about his 22 years of experience in the Army and Special Forces. All of the deployments he had been on, the places he had been, what life was like for him over the past 22 years, and what his plans were for the future. I can tell you, SGM Ben is a true hero and an American patriot. I am blessed to have been able to spend time with him and get to know him.”

The $5,000 grant donated by the Homes for Heroes Foundation allowed 18 service members to be transported. In the case of SGM Ben, it was to see his wife and children. Pilot Chad Lacy volunteered his time, plane and fuel to help make that happen. They both enjoyed their time on the flight together, and more importantly, they both had enormous respect and appreciation for each other.

SGM Ben was asked for the most special memory of his experience with the Veterans Airlift Command and his flight to see his family. He had this to say, “It was meeting people like Chad, and talking to people like Chad (who have never served in the military), who truly just want to help and give back to military members like me. It’s great to know people like Chad and organizations like the VAC and yours are out there. It means a lot.”