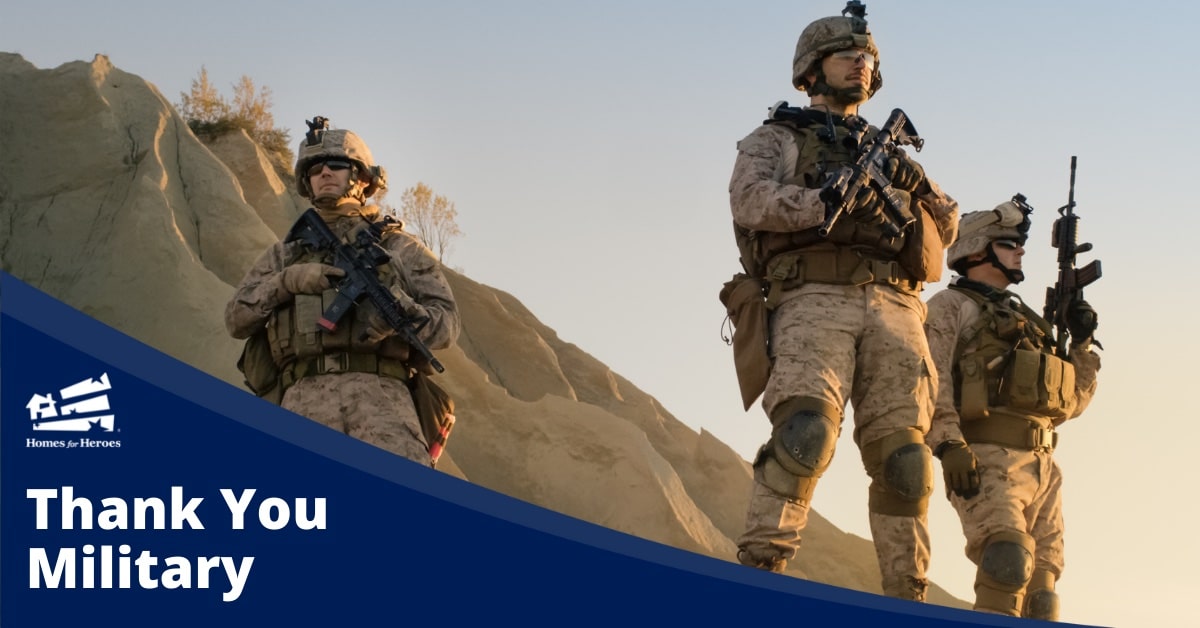 Showing our military appreciation all year long is a great way to say thank you Veterans, Active Duty and Reserve for your service and sacrifice. Each of the six branches of the U.S. Military plays an important role in our country’s history and there are many ways you can show your appreciation for military service members and their contributions. Here we offer our gratitude, provide you with a comprehensive list of military holidays and observances, and 14 ways to show your military appreciation and offer your support any time of year. Plus, we offer a glimpse into all that Homes for Heroes is doing to support our nation’s military community by saving them money on their home and mortgage transactions, and awarding grants to assist homeless veterans in need.

For those of you attempting to learn more about the military community:

Thank You Veterans for Your Service

There are 18 million military Veterans in the United States according to the June 2, 2020 Census Report and this large group of American citizens represent seven percent of the U.S. adult population (18 years or older).

Military Veterans have made many sacrifices to serve our country, including putting their lives on the line to protect our nation. They have sacrificed time away from their families and friends, as well as civilian careers. In addition many Veterans suffer from physical or mental injuries, or service-connected disabilities.

Because of their service and their sacrifice, we appreciate and honor the service of military Veterans. They are brave men and women who have put their lives on the line to protect our freedom and way of life. And, due to their skills acquired during their time in the military, our Veterans play an important role in the health of our country’s economy and community culture after their service.

There are over 1.3 million Active-Duty U.S. military service members according to the 2020 Demographics Profile of the Military Community report. Active-Duty military service members continue to serve our country. They are playing an active role in U.S. military initiatives and priorities right now, at home and overseas. This may include putting their lives on the line to complete the mission. They also sacrifice time away from their families and friends. And through their service, they may suffer from service-connected injuries or disabilities.

The sacrifices they are making today, and the remaining days of their service, are why we appreciate them and why we are grateful for their service.

Thank you Active-Duty military members for your ongoing service and sacrifice. Be sure to tell the ones you know AND the ones you meet.

The Military National Guard and Reserve has over 800,000 support service members. These two reserve components of the U.S. Military provides support to the other branches of the military.

The Military Reserve’s primary mission is to provide trained and ready forces for national defense, but it also plays an important role in providing support to civil authorities during emergencies. In addition, the Military Reserve supports other government agencies, such as the Federal Emergency Management Agency and the Department of Homeland Security.

The National Guard’s primary mission is to provide support to the other branches of the military, but it also plays an important role in providing security at airports and on military bases. In addition, the National Guard helps with disaster relief efforts and provides support to law enforcement agencies.

The Military National Guard and Reserve play a support role, but their service and sacrifice is just as important to the success of our U.S. Armed Forces and its duties.

Thank you Military National Guard and Reserve service members for your ongoing service, support and sacrifice. Be sure to tell the ones you know AND the ones you meet.

Thank You Military Families and Spouses for Your Service

Military families play an important role in providing emotional support, financial stability, and practical assistance to their loved ones who served or are serving.

Military families make many sacrifices, including time away from their loved ones. They may struggle because there is one less adult to handle the family’s affairs. And, there’s the weight of emotional anxiety or fear of a family member being injured or killed in action. Or, the impact of losing a loved one who pays the ultimate sacrifice and is killed in action.

For these sacrifices and the service you provide your loved ones during and after deployment, we thank you military families, spouses and children. Be sure to tell the ones you know AND the ones you meet.

Appreciation for the Branches of the US Military

We honor the unique history, tradition, and new beginnings of the six branches of the US Military: Army, Navy, Marine Corps, Air Force, Coast Guard, and Space Force.

The United States Army is the largest and oldest branch of the U.S. Military, and it is responsible for land-based operations. There are 480,000 Active-Duty, 525,000 National Guard and Reserve, and 8 million Veteran service members of the U.S. Army.

The Army’s Mission: To deploy, fight, and win our Nation’s wars by providing ready, prompt, and sustained land dominance by Army forces across the full spectrum of conflict as part of the Joint Force.

Just writing/reading that statement makes me sit up taller and puff up my chest.

Thank you Army service members for all you do (or did) to deploy, fight, and win our nation’s wars. Be sure to tell the ones you know AND the ones you meet.

The United States Navy is a seagoing branch of the U.S. Military, and it is responsible for maritime operations. The Navy has over 340,000 Active Duty personnel, 58,000 Navy Reserve and 4 million Veterans.

The Navy’s Mission: The United States is a maritime nation, and the U.S. Navy protects America at sea. Alongside our allies and partners, we defend freedom, preserve economic prosperity, and keep the seas open and free. Our nation is engaged in long-term competition. To defend American interests around the globe, the U.S. Navy must remain prepared to execute our timeless role, as directed by Congress and the President.

Thank you Navy service members for all you do (or did) to protect our nation at sea. Be sure to tell the ones you know AND the ones you meet.

The United States Air Force is the aerial warfare branch of the U.S. Military, and it is responsible for providing airpower. The Air Force has over 340,000 Active Duty personnel, more than 175,000 Air National Guard and Reserves, and over 3 million Veterans.

They just updated their mission statement in 2021 and I really like it. Simple, strong, easy to remember and straight to the point.

Thank you Air Force service members for all you do (or did) for this country, and for providing airpower anytime, anywhere! Be sure to tell the ones you know AND the ones you meet.

The United States Marine Corps is a branch of the U.S. Military that is primarily responsible for amphibious and ground combat operations. The Marine Corps is organized under the U.S. Navy, and it has over 180,000 Active-Duty personnel, more than 38,000 Marine Corp Reserve, and 2 million Veterans.

Thank you Marine Corp service members for all you do (or did) to optimize capabilities across all war fighting functions for our nation. Be sure to tell the ones you know AND the ones you meet.

The United States Coast Guard is a branch of the U.S. Military that is responsible for maritime safety, security, and stewardship. The Coast Guard has over 42,000 Active military personnel, more than 6,000 Coast Guard Reserve, and more than 176,000 Veterans.

The Coast Guard Mission: To ensure our nation’s maritime safety, security and stewardship.

Thank you Coast Guard service members for all you do (or did) to protect our nation’s maritime safety, security and stewardship. Be sure to tell the ones you know AND the ones you meet.

The U.S. Space Force (USSF) is a distinct branch of the armed services. The branch is organized under the U.S. Air Force, similar to how the U.S. Marine Corps is organized under the U.S. Navy. The U.S. Space Force is responsible for organizing, training and equipping Space Force Guardians to conduct global space operations. Called to protect and defend American interests and to ensure our forces, our allies, and the world never experience a day without space.

The Space Force Mission: To enhance the way U.S. forces fight and to provide decision makers with additional military options.

Thank you Space Force service members for all you do (or did) to enhance the way our nation’s forces fight. Be sure to tell the ones you know AND the ones you meet.

Specific Times to Reflect, Honor and Appreciate Our Military

It’s always important to have respect and to show our military appreciation, and our service members’ gratitude for representing and defending the country we call home. During special days, weeks or months of the year we focus on important holidays or observances to remind us of our brothers and sisters who served in the military, who are currently serving in the military, or who support our military service members.

Here is a list of the important military holidays and observances to reflect, honor and appreciate the service of our military members and their families throughout the year. Please reference the list of ways to show your appreciation in the next section and use this list of observances as a starting point to mark your calendar, get involved and say, “Thank you for your service”.

14 Ways to Show Gratitude and Say Thank You to Military

Homes for Heroes was created shortly after the events of 9/11 to give back to the heroes who serve and sacrifice for the rest of us and say thank you veterans, active-duty and reserve military members for your service and sacrifice.

$2,400 Average Savings When You Buy, Sell or Refinance

To thank you, our real estate and mortgage specialists can save you an average of $2,400 when you buy, sell or refinance a home or mortgage. We take pride in the service our local specialists provide our military service members. Our specialists know your community. They know how to navigate the housing and mortgage trends, and how to help you take advantage of the VA loan benefits. They joined Homes for Heroes specifically to serve military service members and to thank you, by saving you significant money when you close on a home or mortgage.

If you’re ready to begin the process of buying and/or selling a home. Or, if you’re in a place to refinance your mortgage, simply register online to speak with our local specialists to get your questions answered. There’s no obligation. We would be honored to assist you with your next home purchase or sale process.

Here are two nonprofit organizations focused on helping homeless veterans and the Homes for Heroes Foundation was able to award them with Hero Grants to support their missions.

Please take a moment to learn more about the Homes for Heroes Foundation and the grants it provides nonprofit organizations who help heroes in need, or simply to make a donation.

Homes for Heroes appreciates you and our country’s military service members and whole-heartedly thank you for your service.