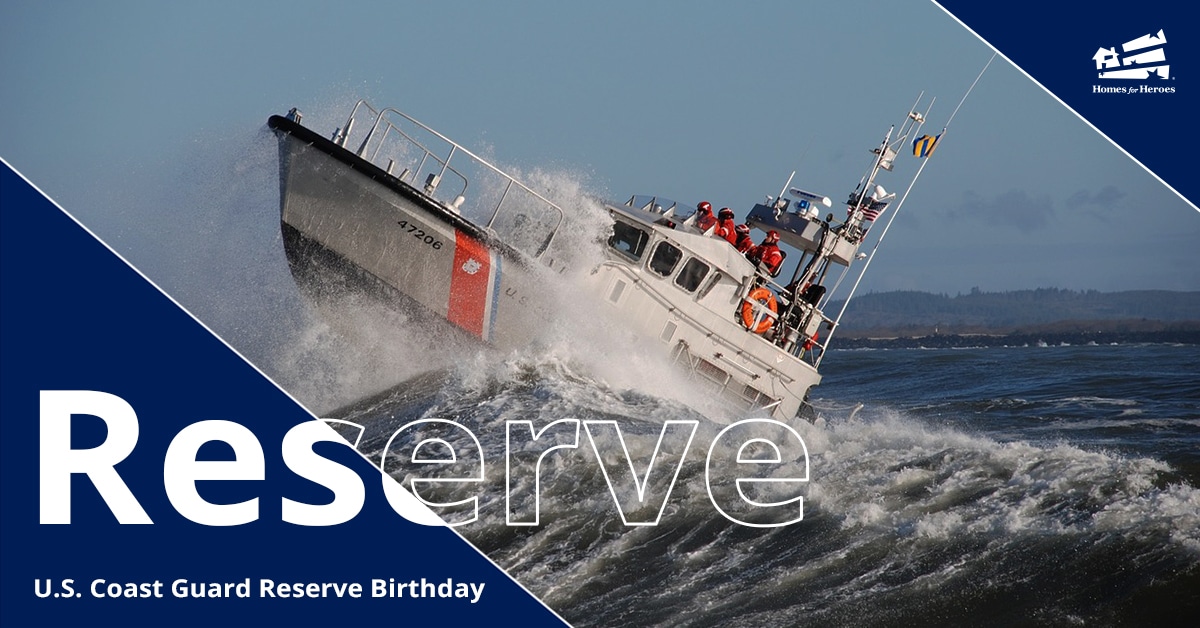 February 19th, 2021, marks the 80th birthday of the United States Coast Guard Reserve. With a rich history of service promoting domestic peace and prosperity, the U.S. Coast Guard Reserve is one of our most reliable sources of homeland disaster relief and maritime education. Coast Guard Reservists live by the motto “Professionalism, Patriotism, Preparedness!“, and are primarily concerned with reacting to and containing the affects of natural disasters and humanitarian crises.

A Brief History of the U.S. Coast Guard Reserve

The Birth of the U.S. Coast Guard Reserve

The Coast Guard was established in 1790 to enforce tariffs for the relatively new United States of America. But, their roles quickly expanded with the growing country, and today they are an essential law enforcement and rescue branch of the U.S. Military. The Reserves help active-duty Coast Guard officers on missions and have been called in often to support rescue efforts during conflicts.

U.S. Coast Guard Reservists came in swarms to assist in the war effort; by the time the war had ended, there were over 142,000 reservists, outnumbering the active Coast Guard by 5 to 1. They primarily assisted with manning Coast Guard and Navy ships, as well as private vessels, across all parts of the globe where the war was being fought. They were also assigned to a number of smaller tasks given to them by the Coast Guard and the Navy, such as rescuing survivors and guarding coastal regions and waterfronts.

On November 23rd of 1942, President Franklin D. Roosevelt passed Public Law 773, establishing the  Coast Guard Women’s Reserve. Women were now allowed to serve in the continental United States, allowing more male service members to be deployed overseas. At first, they were primarily tasked with clerical jobs, and had very little authority over their male counterparts.  This branch was called  SPARS, an acronym for Semper Paratus – Always Ready. These women, along with their temporary and regular reserves male counterparts, were part of all Coast Guard missions during the second world war.

The U.S. Coast Guard and the U.S. Coast Guard Reserves also performed daring rescues, landed troops on distant coasts, and patrolled America’s coastline. There are many stories of their heroics during WWII, and one interesting one involves the fire that broke out on the cargo ship El Estero which was carrying bombs for the war effort.  Coast guard reservists in the area responded immediately and worked with the servicemen to prevent a detonation. After that event, the U.S. Coast Guard Reserve introduced new safety measures and procedures to prevent sabotage and similar accidents.

After the end of World War II, the U.S. Coast Guard Reserve’s overall size was greatly reduced as most members were either discharged or placed on inactive duty. The Coast Guard’s responsibilities continued to grow, and it became crucial to have a paid Reserve to support the Coast Guard on its missions. In 1950, congress set aside funds for this, and the first modern-day U.S. Coast Guard Reserve Unit was established in Boston. Reservists were active in the Korean War, but saw a much greater level of involvement in the Vietnam Conflict. The Women’s Reserve was temporarily disbanded in 1947, but was later reestablished in 1949.

Beginning in the early 1970’s, the U.S. Coast Guard Reserve began to be called for different types of operations, including natural disaster relief, humanitarian crises, and assistance in dealing with shipping and aircraft accidents. U.S. Coast Guard Reservists have been involved in a number of disaster relief programs that have occurred both on and off the continental United States since its founding. These programs include the recovering of the crash of TWA Flight 800 in the Atlantic Ocean, Hurricane Katrina, and countless instances of inland river floods and oil spills.

The U.S. Coast Guard Reserve is also involved in a number of education programs geared towards promoting general awareness on marine-related topics. The Sea Partners program, formed in 1994, is geared towards educating the general populace on the negative effects of pollution on our waterways, how to properly adhere to environmental protection laws, and the various ways that we can promote environmental wellness and awareness in our everyday lives.

Today, Reservists dedicate their time to service at their own discretion, and prioritize flexibility and quick response times so as to be able to handle issues appropriately as the arise.

Reservists, who are fully-trained members of the United States Coast Guard, are asked to dedicate one weekend per month and two weeks per year on a military base as active members of the Coast Guard.  Members of the U.S. Coast Guard Reserve are typically deployed as a part of domestic disaster relief programs, and it is fairly uncommon for them to be called to action outside of the continental United States. They also help the Coast Guard in efforts to protect the environment and environmental cleanups. In case of conflict or natural disaster, they are a significant line of defense and civilian evacuation.

When applying to be a U.S. Coast Guard Reservist, there are a number of possible ratings, or jobs, that you may be assigned to. Some of these ratings are:

In May of 1942, Commander-in-Chief of the United States Fleet Admiral E. J. King commanded the Eastern Sea Frontier to use the civilian vessels that they had acquired for military purposes. According to his orders, each of these vessels were to be manned by members of the U.S. Coast Guard Reserves, and were to be equipped with depth charges, at least one machine gun, and a radio set. Within a few months, the Coastal Picket organization was deployed along the Atlantic coast of the United States, and was tasked with protecting the coastline from enemy attacks. Larger vessels that lacked an auxiliary motor, know as the “Corsair Fleet”,  were sent farther off shore in order to listen for potential invaders beneath the ocean’s surface. Service in this operation was largely uneventful, but harsh and demanding all the same.

On July 16th, 1999, a plane carrying the son of late U.S. President John F. Kennedy crashed into the Atlantic Ocean just off of the coast of Massachusetts. At 2:15 a.m. on July 17th, the Coast Guard was notified of the crash, and deployed a search and rescue operation that included Reservists. Then, on July 21st, the bodies of John. F. Kennedy Jr., his wife Carolyn Bessette, and sister-in-law Lauren Bessette were found with the aid of sonar technology.

In September of 1992, South Florida was left trying to pick up the pieces left behind by Hurricane Andrew. In order to assist with disaster relief programs, U.S. Coast Guard Reservists were recalled to active duty in effected areas. Prior to this instance, the Coast Guard Reserve had only been involuntarily recalled to active duty on a few occasions. However, after the devastation caused by Hurricane Andrew, it has become commonplace for coastline areas and U.S. territories to request an involuntary recall whenever they are threatened by a hurricane.

The U.S. Coast Guard Reserves have also helped with numerous environmental and natural disasters. These include the Exxon Valdez oil spill in 1989, the second-largest oil spill after the Deepwater Horizon Spill in 2010. They contributed 65% of the personnel needed for the cleanup exercise. The Reservists were part of rescue missions during the 2010 earthquake that devastated Haiti.  Reservists have been part of rescue missions during 12 hurricanes, including Katrina in 2005, Matthew in 2016, and Maria in 2017. They also participated in rescue efforts during six serious flood operations. The U.S. Coast Guard Reserves continue to work with the Coast Guard to protect the environment, prevent maritime crime, and protect America’s economic interests worldwide.

As the coast Guard Reserves’ founding anniversary approaches, you can start your military service through the U.S. Coast Guard Reserves. There are many benefits of joining, including funds to cover university fees, reserve pay, and health and retirement benefits. Joining the Reserves will also offer you an opportunity to help your fellow man during rescue operations worldwide.

If you are a member of the U.S. Coast Guard Reserves, U.S. Coast Guard, or any active or veteran military professional, teacher, EMS, police officer, firefighter, or healthcare worker looking to buy and/or sell a home or refinance your house, contact Homes for Heroes. When you buy and/or sell a home with our local real estate specialist, you will receive a check for 0.7% of the purchase price or $700 for every $100K. Plus, if you work with our mortgage, title and inspection specialists, you can save $500 on lender fees, $150 on title services, and $50 on a home inspection. That adds up to thousands of dollars in savings! Once you sign up, there is no obligation, no fees, and no red tape. We simply want to say thank you to our heroes for being you.