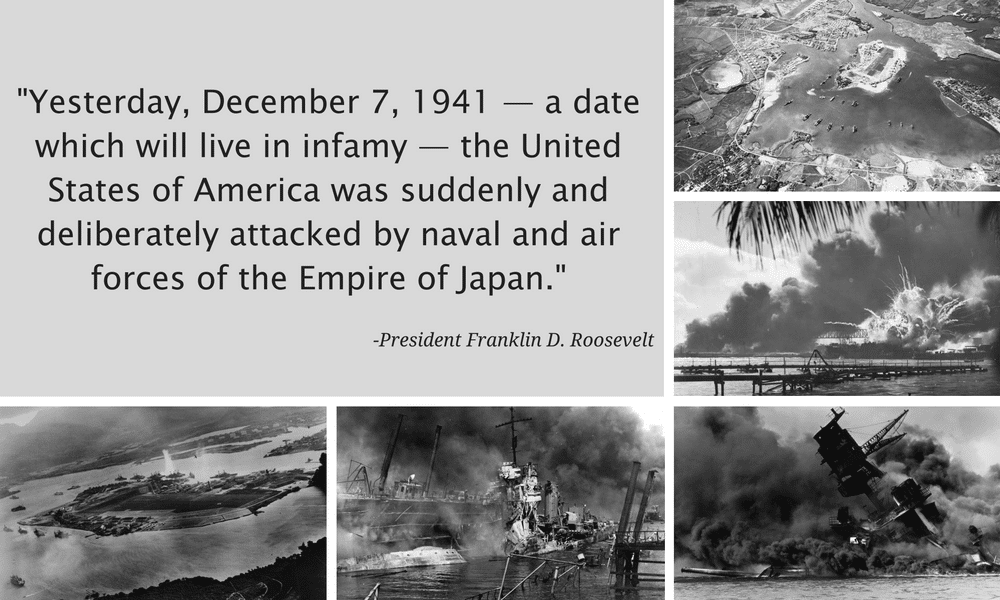 On December 7, 1941, time literally stood still in the United States of America. The unthinkable took place and the entire world was left in shock. Seventy-five years ago today, the Imperial Japanese Navy launched a surprise attack on the U.S. naval base at Pearl Harbor, Hawaii, which led to our great nation partaking in World War II.

To remember Pearl Harbor and honor those who lived it, survived it and gave the ultimately sacrifice, we would like to share memorable quotes made by prominent people in U.S. history and share the stories of the great heroes of that time who are still with us today. However, before we get to that, all of us at Homes for Heroes® would like to say thank you to the Heroes who put their lives on the line that day and during WWII. You are appreciated more than you know!

To learn more about Pearl Harbor, be sure to visit History.com.

“Yesterday, December 7, 1941- a date that will live in infamy- the United States of America was suddenly and deliberately attacked by naval and air forces of the Empire of Japan… No matter how long it may take us to overcome this premeditated invasion, the American people will through their righteous might win through absolute victory… With confidence in our armed forces with the unbounded determination of our people – we will gain the inevitable triumph so help us God. I therefore ask that congress declare war that since that dastardly and unprovoked attack by Japan on Sunday… A state of war has existed between the United States and Japanese Empire.”

“Before we’re through with them, the Japanese language will be spoken only in Hell.”

“I feel all we have done is to awaken a sleeping giant and fill him with terrible resolve.”

“I have nothing to offer but blood, toil, tears and sweat.”

“May God have mercy upon my enemies, because I won’t.”

“There’s nothing stronger than the heart of a volunteer.”

The Heroes Who Survived

“Charles Hocker wanted to escape Beaver Dam, Ky. John Gideon followed a friend into the Navy, thinking about what young men think about.

“And that’s why they were American military men in what seemed like paradise — in Pearl Harbor, Hawaii, on a date, 75 years ago, that will live in infamy.”

“HONOLULU, Dec. 4, 2016 — With cheers, tears and a water cannon salute, Hawaii veterans and residents welcomed Pearl Harbor survivors back to Oahu yesterday, 75 years after the surprise Japanese attack on the island.”

“As they prepare to mark the 75th anniversary of the attack on Pearl Harbor on Wednesday, Las Vegas veterans who lived through it say they fear the lessons of the surprise raid by Japanese warplanes and the global war it helped set in motion are being forgotten as their numbers dwindle.”

“There aren’t many left like Russell Shields. He’s one of a dwindling number of survivors of the Japanese attack on Pearl Harbor.

“Come Wednesday, America will mark the 75th anniversary. Shields was just a young man back then. Today, he’s 94.”

“For many of the men who survived the Japanese attack on Pearl Harbor, the 75 years since have been difficult. Around North Texas — and nationwide — their numbers are dwindling. And in many cases, so is their willingness to discuss that fateful day.

“While their memories of the Dec. 7, 1941, attack remain sharp, some are open to discussing it; others are not.”

“When Robert Greenleaf closes his eyes, he still sees the red circles of the Rising Sun painted on the wings of Japanese warplanes headed toward nearby Pearl Harbor.”

“HONOLULU—Pearl Harbor survivor Dick Girocco is one of the last men standing.

“During the Dec. 7, 1941, attack by the Japanese, Mr. Girocco was one of about 60,000 military personnel stationed on Oahu. The attack claimed the lives of 2,403 Americans, most on ships that were bombed at the Pearl Harbor naval base.”

“I was aboard the USS Arizona on the morning of December 7, 1941. The courage I saw in our men was astonishing.

“Those gallant sailors fought back however they could. Pilots tried to locate airplanes that were still operable, but only a few managed to get in the air and into the fight.”

“And then there were three.

“Well, actually there were only two.

“John Terrell of Batavia, who was aboard the USS Perry on Dec. 7, 1941, was not able to attend Monday’s Pearl Harbor Day Memorial Luncheon in Aurora, honoring the 75th anniversary of the surprise Japanese attack that launched the country into World War II.”

If you are hero in need or want to help those in need, please visit