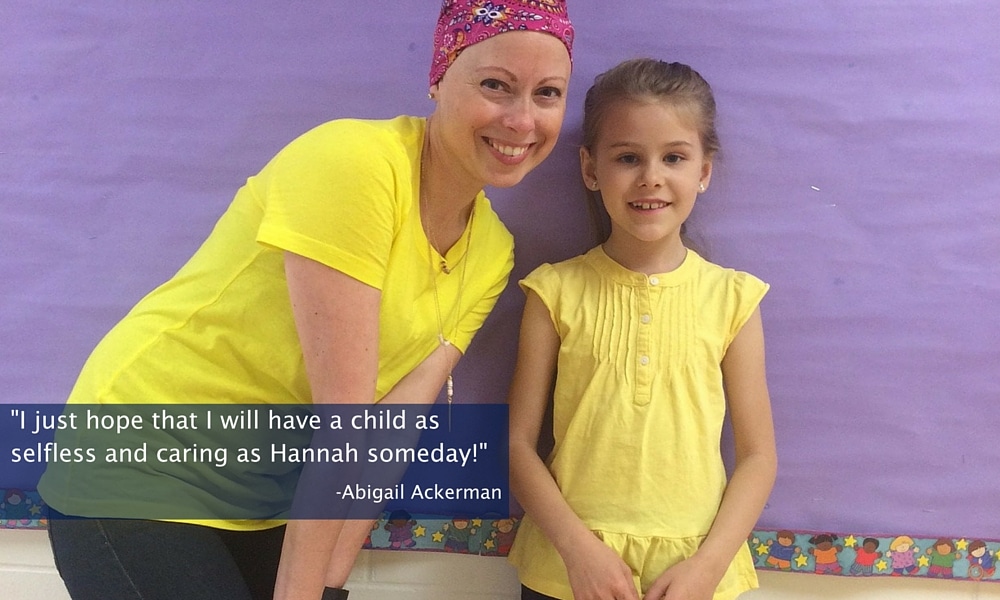 Abigail Ackerman is a New Jersey school teacher at Hamilton School and is truly an everyday hero. However, in November 2015 life took a drastic turn for Ackerman and she was diagnosed with cancer, Primary Mediastinal Large B-Cell Lymphoma. We heard about her story through our Incredible Kids contest held earlier this year. Ackerman submitted her former student Hannah, who not only won our contest, but left a mark on our hearts.

Ackerman grew up in Bethlehem, Pennsylvania with her two brothers, sister and her parents who are both former educators; her father is a retired principal and her mother a retired kindergarten teacher. Following high school, Ackerman attended Penn State University and continued her education at Moravian College, where she received her Master’s in education.

Becoming a teacher was something Ackerman knew she was meant to do. We asked her the simple question of “why:”

“Many say that ‘teaching is in my blood.’ Not only did I have wonderful mentors as parents, but I also was fortunate to be a teaching assistant at Freedom High School my senior year to an incredible teacher, Jennifer Wescoe. She taught me that teaching isn’t just about what is found in our textbooks. It is about the experiences we give our students, the rapport we have with the children and parents, and the fun that we can bring into the classroom. Ms. Wescoe and I still talk to this day and she continues to amaze me with what she does with her students. I always hoped that I would make the impact she has made on me and when I was diagnosed with cancer, I realized that I had achieved this type of relationship with my own students and their families (past and present).”

November 22, 2015 is a day Ackerman will never forget for a few reasons. This was the day she intended to move into her and her husbands newly restored farmhouse. It was also her parents anniversary, a dear friends birthday and it was the day she was diagnosed with cancer. This day was the day that time literally stood still, and her life went in the complete opposite direction.

“I was diagnosed with Primary Mediastinal Large B-Cell Lymphoma on November 22, 2015. This day is particularly memorable because it’s my parent’s anniversary, my dear friend’s birthday, and the day that I was supposed to move into the farmhouse that we have been restoring for two years. Our boxes were packed, the car was loaded, and my husband was in New Jersey awaiting my arrival to move into our home. Instead, I called him to tell him that I had terrible chest pain and that my parents were taking me to the emergency room. After many tests, it was evident that I had cancer. I never expected to go to the ER and hear those words. It was extremely hard to hear and very difficult to share this news with friends and family.”

While telling family and close friends the horrible news, the hardest part for Ackerman was sharing the news with her students and their families.

“Sharing this news with my students and parents was the hardest part of being diagnosed with cancer because it meant that I wasn’t going to see them for five months. Being a teacher gives me so much joy and I am so lucky to wake up in the morning excited to go to work. Knowing I would be away from them caused a lot of heartache on both ends. However, I quickly realized how fortunate I am to be a part of The Hamilton School Community. Not only was I showered with so many cards, gifts and flowers, but they went above and beyond by making a school-wide music video, having a holiday sweater dress down day to raise money for traveling to treatments, having a staff birthday party for me via facetime because I had treatment, and best of all, a “welcome back” pep rally complete with parents and even my own principal donating her hair. My school and parents of students were also incredibly giving as I embarked my own way to give back during my treatments. I started making chemo kits for patients at five hospitals in Pennsylvania and one in New Jersey. After one Facebook post about my chemo kits, my staff and parents at Hamilton School began collecting items to add to these kits so that the monetary strain was not always on my family. This collection began trickling to other businesses and community members as I have now partnered this project with Muhlenberg Softball Alumni Association, The Wellness Boutique in Easton, and Leading Edge Martial Arts of the Lehigh Valley. This outpouring of kindness helped me get through my treatments and it is apparent that Hannah wanted to continue to spread such kindness.”

The Little Girl Who Did The Unexpected

At the time of Ackerman’s diagnoses, Hannah was a student in her kindergarten class and as she explained, telling her students about the cancer was the hardest part of all. Hannah, who is now in first grade, did the unexpected after finding out about her teacher’s illness.

This is Hannah and Abigail’s story.

“I always knew Hannah was special because she was always more mature than a typical kindergartner and had different interests than most five year olds. Hannah loved to talk with me about nature, animals, and how things work. She loved to walk with me at recess and share stories about her life taking care of her baby chicks or telling me that her tadpoles were growing into frogs. She was always very kind to her friends and loved to be a helper at school. Her mother once shared that she would come home from school each day and play ‘Mrs. Wilson’ complete with an outfit that matched what I wore that day.”

“When I was diagnosed with cancer, I received a lovely card from Hannah’s mother with $32 in it. I didn’t know why it was $32 at the time. I thought it was an interesting amount but appreciated the generosity. Then, for Valentine’s Day, I received another beautiful card, this time with more detail. I read that Hannah had collected this money because she wanted to help me. She had been selling eggs from her chickens because at one time, Hannah’s huge heart had urged her to sell eggs when her mother had been ill. Hannah’s willingness to give to others didn’t stop there. Along with the card from her mother, was a large manila envelope. Inside, were four beautiful blonde locks of hair that Hannah had wanted to donate to me. Her mother shared that Hannah had heard at school that to donate hair she would need ten inches. She came home and asked her mother if she had ten inches to give because my hair color matched hers and she wanted me to have a wig that matched. This envelope came at a time when I needed it most. It had been my first week of pain, infections, and a trip to the emergency room. However, Hannah’s generosity and courage left me feeling overwhelmed with kindness and love. She really helped turn my week around and without knowing it, inspired many others to donate their hair as well.”

As we explained above, we heard about and became inspired by Ackerman’s story through our Incredible Kids contest. After reaching out, we became aware of the amazing news that Ackerman was officially in remission.

“Hearing the news that I was in remission was very exciting. I celebrated by going to dinner with my husband and parents that day. My parents also held a large party with my family at one of our favorite restaurants. I have many upcoming trips and events planned with family, friends, staff members, and even parents of students at my school. My most exciting trip of all, is a family trip to Disney World in August when I have more energy.”

While celebrating the amazing news, Ackerman took the time to reflect and answer one last question for us: “Did you ever feel like giving up?”

“When I was first diagnosed, it was very upsetting because when I first had my biopsies, they thought that I had a different type of cancer. They thought it was a very rare type of cancer and that didn’t have a promising survival rate. However, after another biopsy and trips to several doctors, I had a new diagnosis and I decided to receive my treatment at Memorial Sloan Kettering. There were a few rough times during my treatment, but my family, friends, and members of Hamilton School were always so uplifting when I was feeling down. I never felt like giving up because I knew I had a lot of things left in my life that I still didn’t achieve yet… One of them being to finally move into the house that has been waiting for me since November 22. ”

If you are hero in need or want to help those in need, please visit
HomesForHeroesFoundation.org.

**Editors note: Ackerman is currently residing in New Jersey and teaching in Pennsylvania.