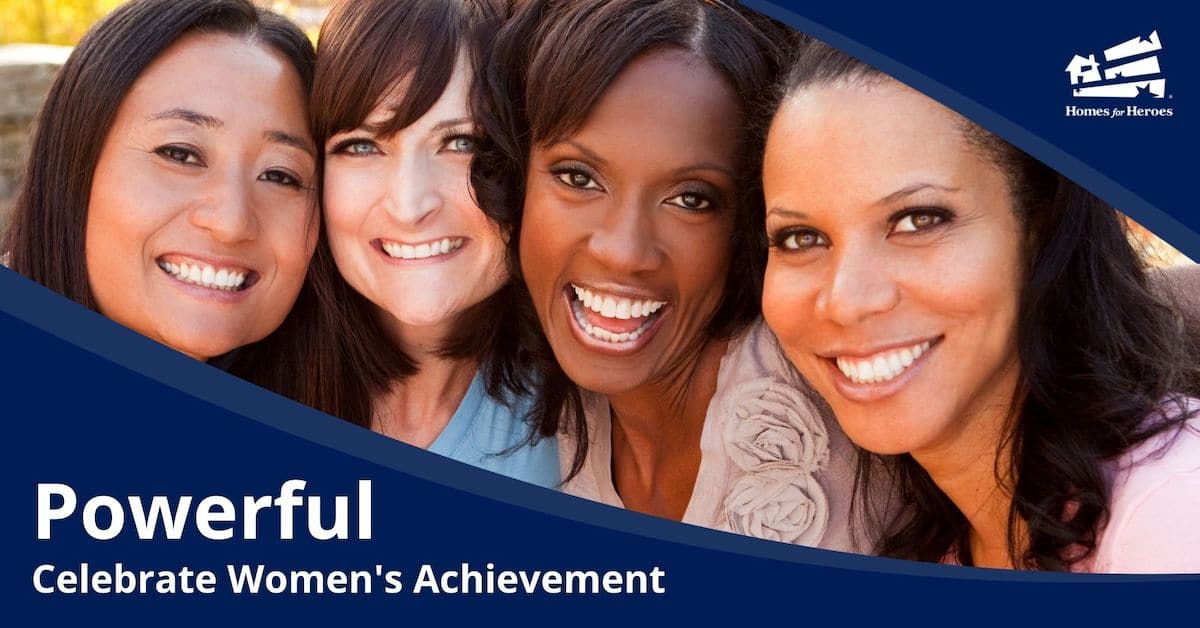 International Women’s Day is a blessing and curse. It’s a blessing to recognize these heroes and a curse that they aren’t household names. If you recognize some of these names, consider yourself enlightened. If not, we have found some great stories about women heroes who have contributed to their country, their field of study, and often, both.

We chose to highlight these women because they represent the six heroes groups that we serve at Homes for Heroes. During our search, we found so many more.

Dr. Jane Cooke Wright was the first woman elected president of the New York Cancer Society and the highest-ranked African American woman at a nationally recognized medical institution. Her pioneering work was in cancer research and chemotherapy. She was instrumental in the discovery and development of methotrexate as a chemotherapy in 1951.

Her work in the field took chemotherapy from an experimental treatment to a widely accessible mainstream therapy that has saved millions of lives. She also pioneered working with combinations of chemotherapy medications and dosage variations–strategies that have dramatically increased the effectiveness of chemotherapy while minimizing side effects.

Her work in skin cancer and breast cancer protocols added years to the lifespans of many patients. She also developed a non-surgical method, using a catheter, to deliver drugs to tumors deep within the body, such as the liver and spleen.

On January 1990, U.S. Army Capt. Linda L. Bray, led 30 MPs in an attack on Panamanian Defense Forces on the night of the American invasion. The resulting combat was intense, and they captured a cache of weapons. That night she became the first woman to command American soldiers in combat. More than 700 women participated in the conflict in Panama.

Her trailblazing role as a commander with the 988th Military Police Company forced the military to reconsider their rules prohibiting women in combat command positions. Secretary of Defense Leon Panetta ended the ban in 2013.

Capt. Bray was quoted by the New York Times saying, “I joined the Army for the excitement, the challenge, the experience and loyalty to my country. I haven’t been let down a day.”

Dr. Margaret Honey is trailblazer in the world of STEM education. Her early work involved using technology to deliver learning, creating the first internet-based professional development programs in the nation. Her current home is as president and CEO of the New York Hall of Science (NYSCI), a learning center housed in one of the remaining buildings from the 1964 New York World’s Fair in Queens, NY.

NYSCI features 450 hands-on exhibits focusing on biochemistry, network science, mathematics, astronomy, physics and genetics. It gets a half million visitors a year and 200,000 students participate in its programs. It also offers professional development to more than 4,000 teachers every year. The motto of the learning center is: Design, Make, Play.

As New York City’s first female police detective, Isabella Goodwin, started her career as a jail matron (appointed by then commissioner Theodore Roosevelt) in 1912. She applied for the job when she was widowed at an early age. While a jail matron was only allowed to look after female and child prisoners, she began to do undercover work investigating crimes.

The case she cracked that won her attention was a mid-day robbery by the “taxi bandits,” involving the theft of $25,000 from a taxi full of bankers. In this case, she went undercover at a boarding house where the chief suspect met with his mistress. Using a fake accent and dressed in ragged clothing, she posed as a scullery in the boarding house. There she overheard enough about the suspect and his cronies to make the case.

There were 60 detectives working the case, but Goodwin solved it. The case got national attention and she was promoted to detective, 1st grade.

She went on to have a 30-year career with the NYPD and founded the Women’s Bureau, a unit that investigated crimes involving prostitutes, runaways, truants and victims of domestic violence.

Deanne Shulman began her career in a traditional firefighting engine crew before she became the first smoke jumper in 1981. Prior to her application, she had worked on a helitack crew, rappelling from helicopters to fight forest fires from. She then joined a hotshot crew for two years before applying to smoke jump.

After completing the training and testing, she was kicked out of the program because she was five pounds below the required minimum weight. She appealed and was admitted. In an interview Shulman said, “since then they’ve had this big push for women, and they also realized that the weights were discriminatory.”

She described her first jump as follows: “There were 12 of us jumping on a huge fire in Utah, It was real windy and I landed coming in backwards and hit a tree–a small tree. Luckily it stopped my backward movement and I dropped to the ground.”

Nancy Lee Caroline actually wrote the book on pre-hospital care, Emergency Care in the Streets in the early 1970s. Although she was trained as a physician, she always identified as a paramedic. She founded Freedom House, an emergency ambulance service that assisted underserved populations in Pittsburgh in the 60s and 70s. It was the first organization to train and use EMT paramedics in the U.S., as well as the first to use EKGs in ambulances.

She worked with her mentor, Dr. Peter Safar, to perfect CPR. Later, with the help of a Swedish doll maker named Asmund Laerdal, she helped create training dolls for CPR, intubation and other procedures. Caroline suggested the first “Stiffneck” type collar, and she is credited with co-inventing the scoop stretcher and the spine board.

Later in the 70s, she emigrated to Israel and became the first director of Magen David Adom, Israel’s equivalent of the Red Cross. That’s where she earned the nickname “Israel’s Mother Theresa” from colleagues.

At Homes for Heroes we honor the heroes of our communities all year round. It’s an honor to do so. We think our heroes would be the first to admit that, to do what they do, they stand on the shoulders of giants. Today, International Women’s Day, we want to call attention to some of those giants, past and present, that inspire our heroes…who, in turn, inspire us.