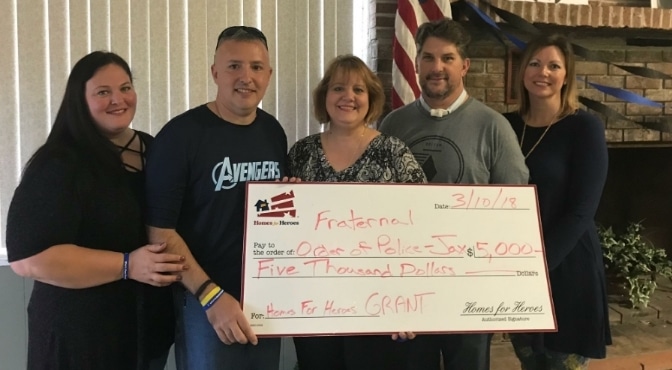 On March 10, Janet Saunier, a Homes for Heroes Affiliate Specialist, presented a $5,000 grant to the Fraternal Order of Police Jacksonville, Florida Lodge 5-30 on behalf of the Homes for Heroes Foundation. The grant will be used to support two Jacksonville officers recently injured in the line of duty.

Following reports of a bank robbery suspect, 11-year veteran officer Jeremy Mason discovered the suspect getting into a car driven by a woman. Police learned later that the suspect had hijacked her car and abducted her. A high-speed pursuit ensued, while the suspect shot at the officers from the passenger side window. Shots blasted through the windshield and hit Officer Mason in the chin during this chase, but he continued to pursue. The suspect then ran through a stop sign, only stopping when hit by an oncoming car. The suspect got out of the vehicle and proceeded to shoot at Mason and a second officer, despite several commands to lower his weapon. When he refused to stop firing, Mason and the other officer shot and killed him. Officer Mason is currently recovering and has plans to return to work, eventually.

Officer Dardeno was hit by a suspect’s car while putting out spike strips to stop them. The suspect seemed to be under the influence and was fleeing the officers who were in pursuit. While Dardeno was placing the stop sticks, the pursuing officer maneuvered their vehicle to stop the suspect, causing them to lose control and hit the officer with their car. Dardeno was taken to the hospital and went through several surgeries lasting through the night. The accident left him with a broken back pressing on his bruised ribs and spine. He will have a long recovery ahead of him.

Janet Saunier is a Homes for Heroes Affiliate Specialist. She and her team give a portion of their commission back to heroes who have purchased or sold their homes with the Homes for Heroes team in Jacksonville, Florida. Saunier also offers the Hockey with a Hero program. The program allows you to nominate a hero to win two tickets to a Jacksonville Icemen hockey game along with the Saunier team.

A local detective nominated Officers Mason and Dardeno for the Hockey with a Hero opportunity. When Janet learned about the two officers and the extent of their injuries, she was inspired to go beyond her initial offer of Icemen tickets. She requested a grant from the Homes for Heroes Foundation, which awards Hero Grants to local nonprofit organizations. 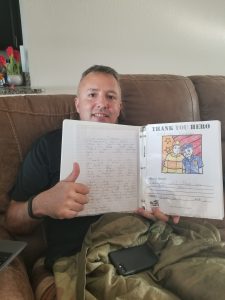 On March 10, in front of over 200 people at the local American Legion, she presented a $5,000 grant to the Fraternal Order of Police which has been directly supporting the officers in their recovery efforts. Saunier also coordinated with local teachers to have their students write letters to the officers wishing them a speedy recovery and thanking them for their service.

Homes for Heroes donates a percentage of their earnings to the Homes for Heroes Foundation. The Foundation then gives grants to nonprofit charities within the community. Organizations like the Fraternal Order of Police Jacksonville, Florida Lodge 5-30 are available to help heroes and their families in their time of need. While spouses and children are sitting at the hospital waiting to hear about the condition of their loved ones, the Fraternal Order of Police is making it possible for donations to come pouring in. They administer the contributions to free up the family to take care of their loved one.

According to the Bureau of Labor Statistics, Police officers have a higher risk of acquiring a work-related injury than most other jobs. On average, “115 police and sheriff’s patrol officers suffered fatal work injuries each year from 2003 to 2014.” Police officers, those in the military, and firefighters put themselves in the face of danger every day to make sure we are safe. EMTs and medical professionals work around the clock to keep us alive. Teachers work with our students to teach them life skills they’ll need after graduation. Homes for Heroes wants to give back to those who dedicate their lives to helping others. We want to say thank you for risking your lives to keep our communities safe.

Hockey with a Hero

If you know of a hero like Officers Jeremy Mason and Russ Dardeno in Jacksonville, Florida who deserves a reward, or even a night off, contact Janet Saunier and her team to nominate your hero for the Hockey with a Hero program. If you know of a hero who is looking to sell or purchase a home, tell them about Homes for Heroes. The opportunity is not only free and professional, but they can save money and help more heroes like Officers Mason and Dardeno.