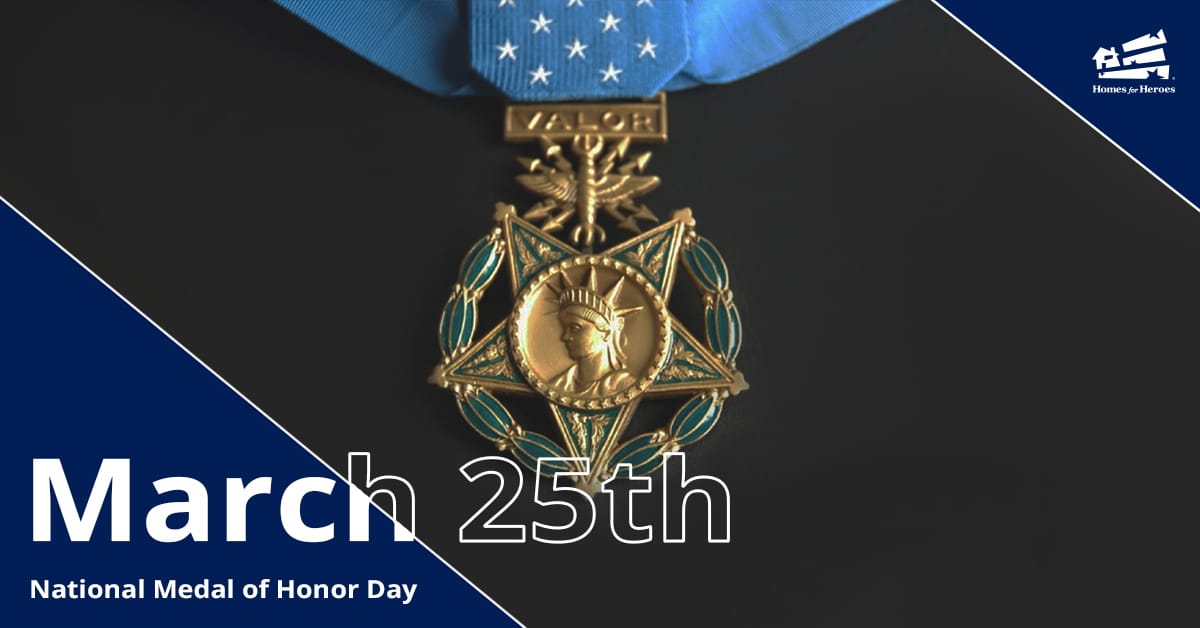 National Medal of Honor Day is celebrated every March 25th, to honor those armed service members who have gone above and beyond, risking their lives in their call to defend and serve. It is a day dedicated to observing our heroes who have demonstrated exceptional gallantry on the battlefield. The Medal of Honor is awarded only to military members who have given sacrifices and went beyond the call of duty.

The Medal of Honor is awarded for valor, courage and bravery in battle or action. It is the U.S. military’s highest and most prestigious award. When the time came for these soldiers, sailors and airmen to defend and protect, they showed willingness to confront, regardless of danger, pain, agony and even the ultimate sacrifice; death. Some have received this medal posthumously.

In November of 1990, President George H.W. Bush signed into law the creation of this holiday. It was subsequently passed by Congress, and celebrated for the first time in March 1991, honoring all Medal of Honor recipients.

Often called the Congressional Medal of Honor due to the fact that it is awarded in the name of Congress, it is actually presented by the President of the United States.

The date of March 25th was chosen because six of the very first medals were awarded on March 25, 1863 to Union Army volunteers. During a raid during the Civil War, these volunteers took over a Confederate train in Georgia, inflicting considerable damage to the railroad and telegraph wires as it ran on the railway headed north. This was known as The Great Locomotive Chase. The first Medal of Honor was awarded to Private Jacob Parrott.

Before the Medal of Honor

Before the Medal of Honor existed, there were others like it that the government awarded. Congress awarded the three people associated with uncovering Benedict Arnold’s espionage with the Fidelity Medallion in the 1700’s. The Badge of Military Merit by George Washington also preceded the Medal of Honor. Two years before Congress created the Medal of Honor, President Lincoln approved the Medal of Valor. In 1861, Bernard J.D. Irwin led his troops to Apache Pass, in Arizona, rescuing 60 soldiers. He would have received the very first medal of honor, but it was before the medal’s creation and he was not awarded his until January of 1894.

Congress initially created the medal for the Army. However, over the following years, it was extended to other branches of the military. By the mid-1960’s, every soldier in every branch of the United States military was qualified to receive the honorable reward for their sacrifices in battle.

How to Receive the Medal of Honor

Congress awards the Medal of Honor to soldiers for sacrifices that go above and beyond the call of duty in the following situations:

The Medal of Honor has been awarded to members of the Army, Navy, Air Force, Marines and Coast Guard. Recipients have received one of three differently designed medals according to their branch of the service. The Navy Medal of Honor was established in 1861 and is given to sailors, Marines and members of the Coast Guard. A year later, in 1862, the Department of the Army medal was established, and only in 1965 was the Air Force medal created. Both the Army and the Air Force medal have the word “Valor” displayed and the Navy medal features an anchor.

We may wonder why they are not referred to as winners of the medal, rather than recipients. These armed service members have never considered themselves winners. Rather, they are simply ordinary soldiers in extraordinary circumstances doing their duty and what they were trained to do in defending those who cannot.

To date, there are 69 Medal of Honor recipients still living and a total of 3526 medals have been awarded. The number of recipients who have earned medals adds up to 3507, which oddly, does not equal the total. Astonishingly, nineteen people have received the Medal of Honor twice.

Sailors and soldiers who have received double medals have totaled eight for the Navy, seven for the Marine Corps and four for the Army. Interestingly, Thomas Custer, brother of General G.W. Custer, won two medals, for the Battle of Namozine Church and the Battle of Sayler’s Creek, both in April of 1865.

Only one woman was ever awarded the Medal of Honor. Mary Edwards Walker was a recipient in 1865. She was a civilian surgeon with the Army in the Civil War. Her medal was stripped when an audit was done on medal recipients in 1916-1917, because she was a civilian. Her family fought to restore her Medal of Honor and it was restored in 1977.

The first African American recipients were sixteen Navy sailors and sixteen Army soldiers, twelve of whom fought outside of Richmond, Virginia during the Civil War. Five sets of brothers have also received this prestigious medal.

Two other famous father and son duos, Theodore Roosevelt and Theodore Roosevelt Jr. also received the Medal of Honor. Theodore “Teddy” Roosevelt helped to liberate Cuba from Spain by serving in the Spanish American War with his troops “The Rough Riders”. His Medal of Honor was awarded for the Battle of San Juan Hill, which occurred in 1898. Teddy was originally denied the medal until it was awarded posthumously in 2001. His son Theodore Jr., was awarded his medal for directing troops onto Utah Beach at Normandy during WWII.

Buffalo Bill Cody, a very colorful part of wild west history, was awarded the medal for the Indian Wars in 1872 but was stripped in 1917 of that medal because he was recognized as a civilian, being a scout. His family later fought this decision and it was reinstated in 1989.

Jimmy Doolittle, a Brigadier General in the U.S. Army Air Corps, led an Army squadron in the bombing of Japan in retaliation for the bombing of Pearl Harbor.

Along with the pride of performing an action that deserved an award, comes several military benefits. These benefits include:

National Medal of Honor Day is not a federal holiday. Therefore, it doesn’t cause governmental institutions to close in observance. Places like the U.S. Post Office, schools, and banks remain open.

Military bases, ceremonies, and communities hold celebrations to commemorate, though. The President might decide to pay a visit to one or more recipients of the award to pay their respects. Many people visit Arlington National Cemetery on March 25th to honor the sacrifice of the brave soldiers.

Citizens can observe the holiday by flying the United States flag at their homes and businesses. They can also donate or support organizations and museums that honor veterans. An excellent way to honor a fallen Medal of Honor recipient is to adopt the gravesite of one of the heroes who may not have anyone to care for it anymore.

On March 25th we will honor all of those service members who gallantly served their country and were awarded the highest honor, the Medal of Honor. We would not be a free country today if it wasn’t for their fortitude and bravery. You can pay tribute to them every day by flying the flag, learning through stories of service and sacrifice, and by giving them our heartfelt thanks.

If you are a recipient of the Medal of Honor, Homes for Heroes thanks you for your service and sacrifice. As an extra thank you, to all our military heroes as well as healthcare workers, teachers, EMS or firefighter, and law enforcement heroes, we want to help you save money when you buy and/or sell you home. If you’re in the market, or know a hero who is, sign up to talk to one of our specialists and find out how you can save on average $2,400 on your real estate transaction.