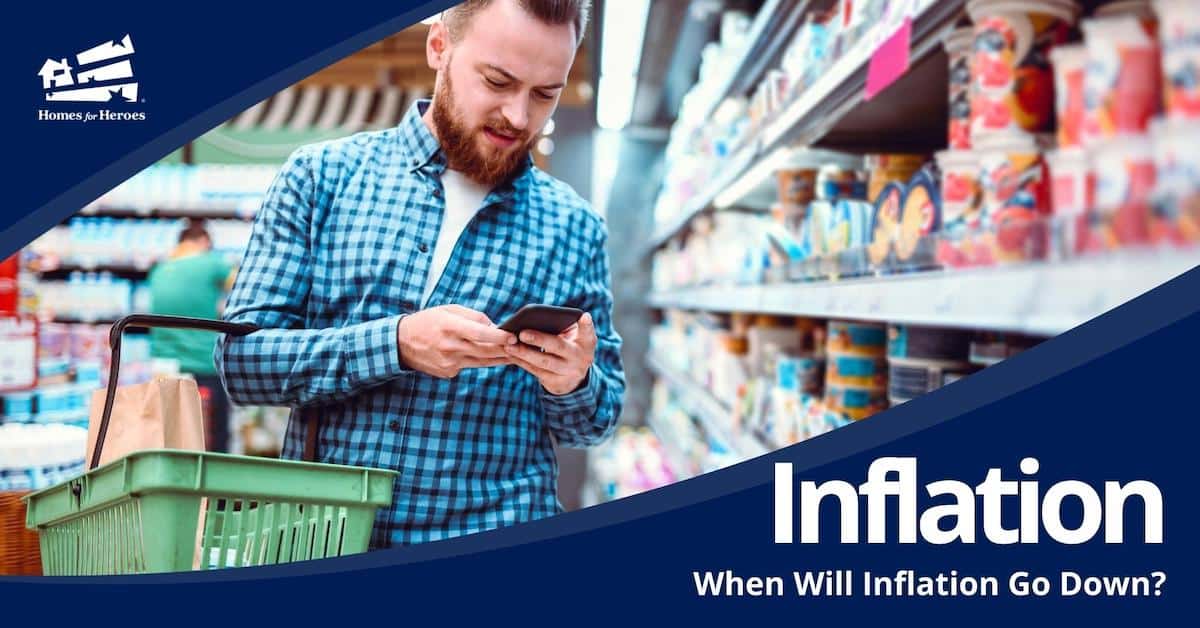 Many people are asking, “when will inflation go down?” Because it’s really hitting the average American household hard in 2022, and probably into 2023. Inflation in 2022 has hit its highest rate since the 1980s as the U.S. economy recovers from the COVID-19 global pandemic. Here we take a look at inflation, what it means for the average American and when experts believe inflation will go down.

Inflation rose by 8.2% annually in October, according to the latest Consumer Price Index (CPI) report from the Bureau of Labor Statistics (BLS). This was down slightly from previous months but remains near 40-year highs. Inflation peaked this year in June when it hit 9.1% annually, according to BLS.

Since then the inflation rate has decreased slightly. But, economists are uncertain if these decreases will become a trend for inflation in the months to come.

The main drivers of inflation over the past year have been rising prices for food, housing and gasoline. As gas prices have begun falling again, total inflation also edged lower.

The Federal Reserve is Trying to Lower Inflation

Although inflation is on the rise, the U.S. government has certain monetary policy tools that it can use to try to control or influence the direction of the inflation rate.

For example, the Federal Reserve can raise or lower the federal funds rate, which is the rate at which banks borrow money. As the federal funds rate rises, banks pass these increased costs on to consumers by raising interest rates on mortgages, student loans, personal loans, credit cards and other lending products. This then slows the rate of lending and the economy.

This year, the Fed has raised rates six times in order to combat inflation levels. At its most recent meeting, the Fed increased interest rates by 75 basis points, bringing the target range for the federal funds rate to 3.75% to 4%.

And as inflation remains near decade highs, the Fed will likely continue raising interest rates in order to bring inflation levels back down, but the rate hikes could be lower than the 75 basis point hikes that came out of the last five meetings.

“The Federal Reserve raised the benchmark interest rate by 75 basis points for a fourth consecutive time, increasing the target range to 3.75% to 4%,” CUNA Senior Economist Dawit Kebede said after the Fed rate hike in November. “The Federal Open Market Committee’s (FOMC) press release reiterated its commitment to bring inflation down to 2%.

However, it stated that future rate increases will consider the lag with which monetary policy affects economic activity and inflation, Kebede said. “This may signal smaller rate increases in future meetings. The FOMC raised rates faster and higher from close to zero levels in March. The tight monetary policy has increased the cost of borrowing for households and businesses.”

Many economists expect we are headed toward a recession, if the U.S. is not in one already. The gross domestic product (GDP) declined by 2.6% in the third quarter after declining in both the first and second quarters. Two consecutive quarters of negative GDP growth is typically considered a recession.

However, the White House and some economists have argued that other factors such as the strong labor market show the U.S. was not in a recession during the first half of this year. But many economists agree that a recession is on the horizon for late 2022 or the beginning of 2023. And some have noted that a recession could help slow rising inflation levels.

Fannie Mae’s Economic and Strategic Research Group predicted inflation will continue to slow through 2022 before dipping considerably in 2023. However, it also noted several risk factors to its forecast.

“We continue to expect the forecasted recession to be modest based in part on the relatively limited degree of labor market slack that we believe is necessary to alleviate above-target inflationary pressure; once achieved, we expect monetary policy will likely ease and the economy will return to growth,” the group wrote in its latest forecast. “It should be noted, however, that historically in periods of rising interest rates and dollar exchange rate appreciation, there has been a tendency for financial crises to occur within the global economy.

“Given the speed at which interest rates have risen, we believe there is growing risk of such an event occurring over the coming quarters, which could lead to a deeper or more prolonged contraction than our base forecast expects,” it continued.

The core personal consumption expenditure (PCE) price index, the focus of the Federal Reserve, is expected to end 2023 at 2.9%.

How Does High Inflation Impact Housing?

Inflation can impact the housing market in several ways. Perhaps most notably, as the Federal Reserve continues to raise rates, it pushes mortgage rates higher.

In November, the average 30-year fixed-rate mortgage surpassed 7%, according to the latest data from Freddie Mac. This is significantly higher than the average rate last year, which hovered below the 3% mark. As mortgage interest rates rise, housing payments become less affordable for new homes or to refinance as monthly payments move higher. This could cause more homebuyers to look for smaller homes or avoid buying a home altogether as they await a more favorable interest rate environment.

Fannie Mae’s ESR group forecasted that total home sales could decrease by 18.1% in 2022 as home sales decrease faster than the group previously expected.

“Over the last few weeks, markets have increasingly – and perhaps reluctantly – reflected the resolve of the Fed to lower inflation via rapid tightening of monetary policy,” said Doug Duncan, Fannie Mae senior vice president and chief economist. “At times, the market has reacted to incoming economic data suggesting the Fed is making progress in its fight with inflation by anticipating a potential policy ‘pivot’ toward a less restrictive regimen, prompting the Fed to restate its resolve.”

High levels of inflation could also affect the housing market as consumers find it more difficult to save up for a down payment, or have less cashflow for the monthly payment on a home.

Homes for Heroes Can Save You Significant Money

Homes for Heroes can help America’s heroes; firefighters, EMS, law enforcement, military, healthcare workers and teachers buy a home by helping them save money on their home purchase (and sale too). With high inflation rates, every bit helps. When heroes work with our local real estate and mortgage specialists to buy or sell a home, they receive an average of $3,000 given back after closing. Take a moment to sign up today and speak with our local specialists. Get your questions answered and save good money when you buy or sell a home, or refinance a mortgage. It’s our way to say, thank you for your service to the community and our country.