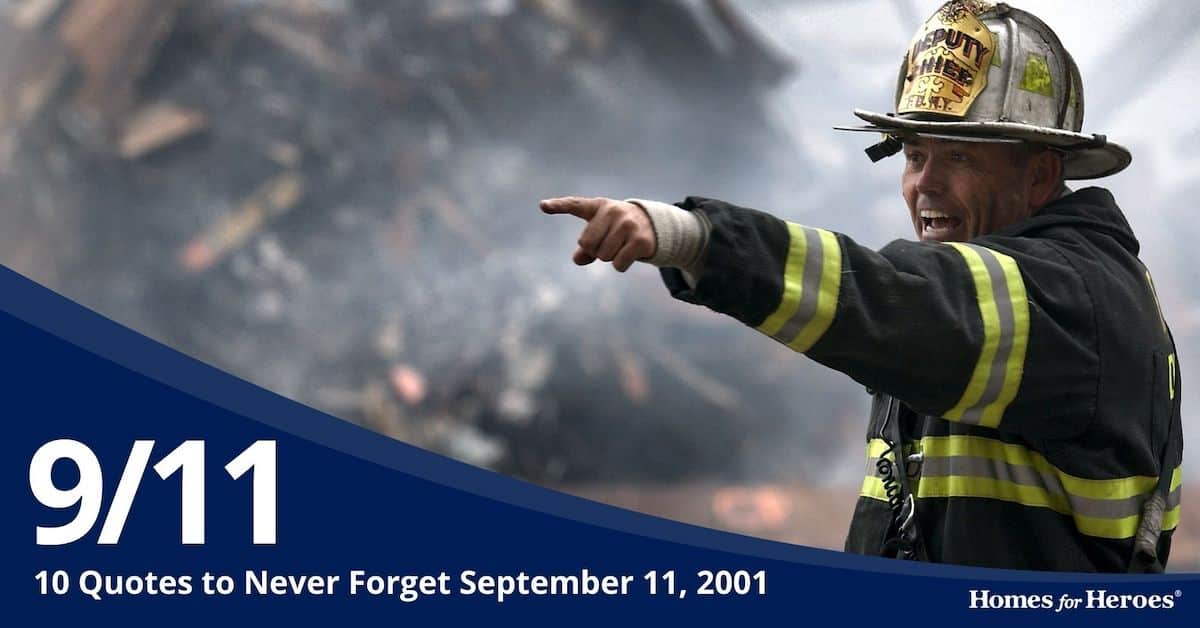 There are many powerful 9/11 quotes one can find to offer a perspective on the events of September 11, 2001. We have assembled ten quotes, and to us they offer a powerful perspective from people who experienced it from different places, like many of us who remember that day. Please take pause to read the words of these ten individuals. To remember, reflect, and never forget what was lost, and what was built out of that terrible tragedy.

For some of us, the day will remain etched in our memory. As it happened, the entire country was confused and scared. We didn’t know what was going on. The devastation was unimaginable and we didn’t know if there would be more to come.

Some Americans sacrificed their lives for others that day.

And, there were many more.

When the dust settled, we mourned. We came together as a country to weep and to stand strong…together. New Yorkers collected themselves and came together to do what needed to get done. Families and friends, after being told their loved one didn’t make it, began navigating the process of grieving their loss. While others held their loved ones closer and tighter. And still there were others who decided to answer the call and defend this country.

For those who did not live through the events and the aftermath to follow, we offer these 10 powerful 9/11 quotes to help provide some perspective; including from those who were directly affected by the events, how their lives changed, and how they reflect on loved ones lost.

For those who remember, never forget.

“It’s the nature of the world that most people have moved on, but the people directly involved with 9/11, for them, twice a day it’s 9/11.” – Robert Reeg, former FDNY firefighter

“One of the worst days in America’s history saw some of the bravest acts in Americans’ history. We’ll always honor the heroes of 9/11. And here at this hallowed place, we pledge that we will never forget their sacrifice.” – Former President George W. Bush at the Pentagon in 2008

“With almost no time to decide, [your loved ones] gave the entire country an incalculable gift. They saved the Capitol from attack. They saved God knows how many lives. They saved the terrorists from claiming the symbolic victory of smashing the center of American government. … They allowed us to survive as a country that could fight terror and still maintain liberty and still welcome people from all over the world from every religion and race and culture as long as they shared our values, because ­ordinary people given no time at all to decide did the right thing.” – Former President Bill Clinton in Shanksville, Pennsylvania, in 2011

“September 11, 2001, revealed heroism in ordinary people who might have gone through their lives never called upon to demonstrate the extent of their courage.” – Geraldine Brooks, Author

“Remember the hours after September 11th when we came together as one to answer the attack against our homeland. We drew strength when our firefighters ran up stairs and risked their lives so that others might live; when rescuers rushed into smoke and fire at the Pentagon; when the men and women of Flight 93 sacrificed themselves to save our nation’s Capitol; when flags were hanging from front porches all across America, and strangers became friends. It was the worst day we have ever seen, but it brought out the best in all of us.” – Former Secretary of State John Kerry

“I give speeches around the country. I tell how Stanley and I made our way out of the tower. Life is precious, I tell them. It can be gone in an instant.” said Brian Clark, 9/11 survivor. Stanley Praimnath, 9/11 survivor said, “I still have the shoes I wore to work that day. The soles are melted and they’re caked in ash. I keep them in a shoebox with the word “deliverance” written all around it. They’re kind of like my ark, a reminder of God’s presence and the life I owe to him.” – Brian Clark and Stanley Praimnath, 9/11 survivors

“My father was the best person I have ever known and though he was taken from me on that day, nothing and no one will ever be able to take away the eight years and two days of my life that I shared with him. After my father died, and after I lost so much, I promised myself that I would never lose who I am as a person – the person that my father brought me up to be. … If you owe someone an apology, tell them you are sorry today. If someone asks for your forgiveness, forgive them. Start being the person you always wanted to be today and don’t waste your time worrying about tomorrow.” – Mary Kate McErlean, whose father was killed on 9/11 when she was 8 years old

“September 11 was, and remains, above all an immense human tragedy. But September 11 also posed a momentous and deliberate challenge not just to America but to the world at large. The target of the terrorists was not only New York and Washington but the very values of freedom, tolerance and decency which underpin our way of life.” – Former British Prime Minister Tony Blair

The anniversary of 9/11 is an important day of remembrance and reflection for Homes for Heroes employees and our local specialists. It was the heroic acts of many New York heroes that day in 2001, and many other heroes throughout the country, that provided the motivation to eventually create Homes for Heroes as a way to give back to those who serve and sacrifice for our nation and its communities every day.

We stand united and we will never forget. And, these powerful 9/11 quotes offer some perspective.

About Homes for Heroes, Inc.

Shortly after the tragic events of 9/11, Homes for Heroes, Inc. was established to give back to firefighters, EMS, law enforcement, military (active, reserves & veterans), healthcare professionals and teachers for their service and all they do for our country and its communities.

Since 2009, Homes for Heroes, Inc. has become the largest nationwide network of affiliate real estate, mortgage, and local business specialists; committed to providing easy ways for heroes to save on a home. Homes for Heroes has helped over 56,000 heroes save over $104 million on their real estate transactions.

And through the Homes for Heroes Circle of Giving, together with their local real estate and mortgage specialists, they have donated over $1.2 million to the Homes for Heroes Foundation. These dollars help the foundation award hero grants to local and national nonprofits who assist heroes in need.