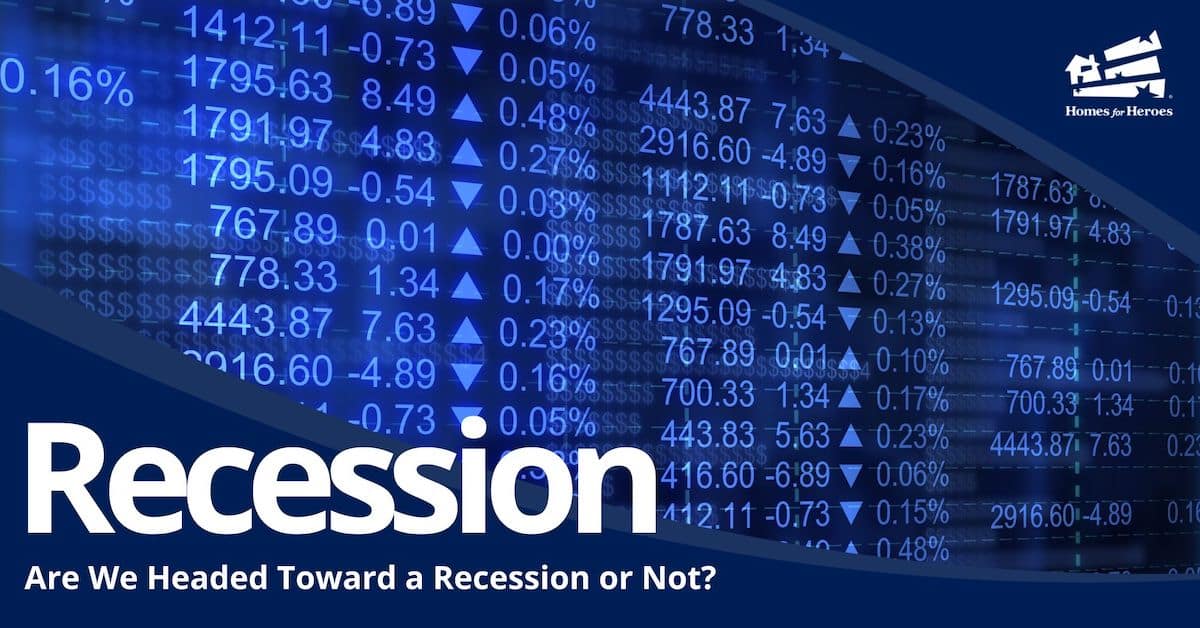 Is a recession coming in the near future? Many economists have debated this point and even considered whether or not the U.S. dropped into a recession in the second quarter of 2022. Experts believe we could be headed toward a recession, but we may see a period of growth before it arrives.

Gross domestic product (GDP) increased in the quarter, growing by 2.6%, according to the advanced estimate from the Bureau of Economic Analysis (BEA). This came after GDP decreased for two consecutive quarters in the first and second quarters this year, BEA data showed.

Traditionally, a recession is indicated by two consecutive quarters of negative GDP. And the National Bureau of Economic Research defines a recession as “a significant decline in economic activity that is spread across the economy and that lasts more than a few months.” The bureau can sometimes wait as long as a year to declare a recession as it awaits incoming economic data.

Before the BEA released the second quarter GDP data, the White House economic team published a blog post, explaining why it does not believe the U.S. is currently in a recession.

“What is a recession? While some maintain that two consecutive quarters of falling real GDP constitute a recession, that is neither the official definition nor the way economists evaluate the state of the business cycle.”

“Based on these data, it is unlikely that the decline in GDP in the first quarter of this year – even if followed by another GDP decline in the second quarter – indicates a recession.”

Other economists agree, saying other strong indicators such as the labor market show the U.S. is not in a recession. And since then, the economy has bounced back from its negative GDP reading. And alongside GDP growth, the economy also added 261,000 jobs in October, according to the Bureau of Labor Statistics (BLS). While this is a slowdown from previous months, it is still an indicator of a strong labor market.

Is There a Recession Coming?

A recession could be on the horizon, but it could be preceded by a period of growth, according to the latest forecast from Fannie Mae’s Economic and Strategic Research Group. The economist group forecasted GDP will rise to 2.3% annual growth in the third quarter followed by 0.7% to end 2022.

From there, Fannie Mae predicts the U.S. will enter into a mild recession in early 2023 and that GDP will contract by 0.5% in the first quarter of 2023.

“We continue to expect the forecasted recession to be modest based in part on the relatively limited degree of labor market slack that we believe is necessary to alleviate above-target inflationary pressure; once achieved, we expect monetary policy will likely ease and the economy will return to growth,” Duncan said.

How will a Recession Affect Your Wallet?

Currently, the economy is stagnating as growth continues to slow. By the beginning of next year, the U.S. could enter into a mild recession. That could have several effects on consumers.

Fannie Mae predicts that home sales will fall in 2022 as economic conditions worsen and interest rates rise. In fact, total home sales for the year could drop by 18.1% from 2021, according to the mortgage giant’s forecast.

And interest rates continue to rise, with the average 30-year mortgage rate surpassing 7% in November, according to data from Freddie Mac.

But consumers could begin to take advantage of the slower housing market once again in 2023. Fannie Mae forecasted that mortgage rates will hold steady at 6.7% this year, but this will be followed by a steady decrease in mortgage rates through 2023, with the 30-year rate ending 2023 at 6.2%.

Interest Rates and the Federal Reserve

Over the past year, the Federal Reserve has begun raising interest rates in order to tame rising inflation. At its November meeting, the Fed increased interest rates for the sixth time this year by 75 basis points, bringing the target range for the federal funds rate to 3.75% to 4%. This comes as inflation remains near its 40-year high after hitting 7.7% annually in October.

The Consumer Price Index (CPI), a measure of inflation, increased by 7.7% annually in October, according to BLS. This was down slightly from the 40-year high of 9.1% in June but remains at historic levels.

Now, even as the U.S. faces a rising risk of recession, the Fed is likely to continue raising interest rates in order to bring inflation back down. Recently, at the most recent Jackson Hole conference, Federal Reserve Chair Jerome Powell said the Fed’s fight against inflation could make it harder on Americans before it gets easier, offering the following statements:

“The Federal Open Market Committee’s (FOMC) overarching focus right now is to bring inflation back down to our 2% goal.”

“Price stability is the responsibility of the Federal Reserve and serves as the bedrock of our economy. Without price stability, the economy does not work for anyone.”

“In particular, without price stability, we will not achieve a sustained period of strong labor market conditions that benefit all,” he continued. “The burdens of high inflation fall heaviest on those who are least able to bear them.”

As the Fed continues to raise rates, it will push interest rates up on other products such as personal loans, student loans, credit cards and other loan products.

While some Americans will choose to purchase a home once interest rates fall and the economy is healthier, many first responders, military personnel, and healthcare workers must move where the job takes them, and the timing may not be flexible.

Homes for Heroes is a Great Way to Save Good Money

Homes for Heroes can help America’s heroes; firefighters, EMS, law enforcement, military, healthcare workers and teachers buy a home in an economic recession by helping them save money on their home purchase. When heroes work with our local real estate and mortgage specialists to buy or sell a home, they receive an average of $3,000 given back after closing. Take a moment to sign up today and speak with our local specialists. Get your questions answered and save good money when you buy or sell a home, or refinance a mortgage with our local specialists. It’s our way to say thank you for your service to the community and our country.