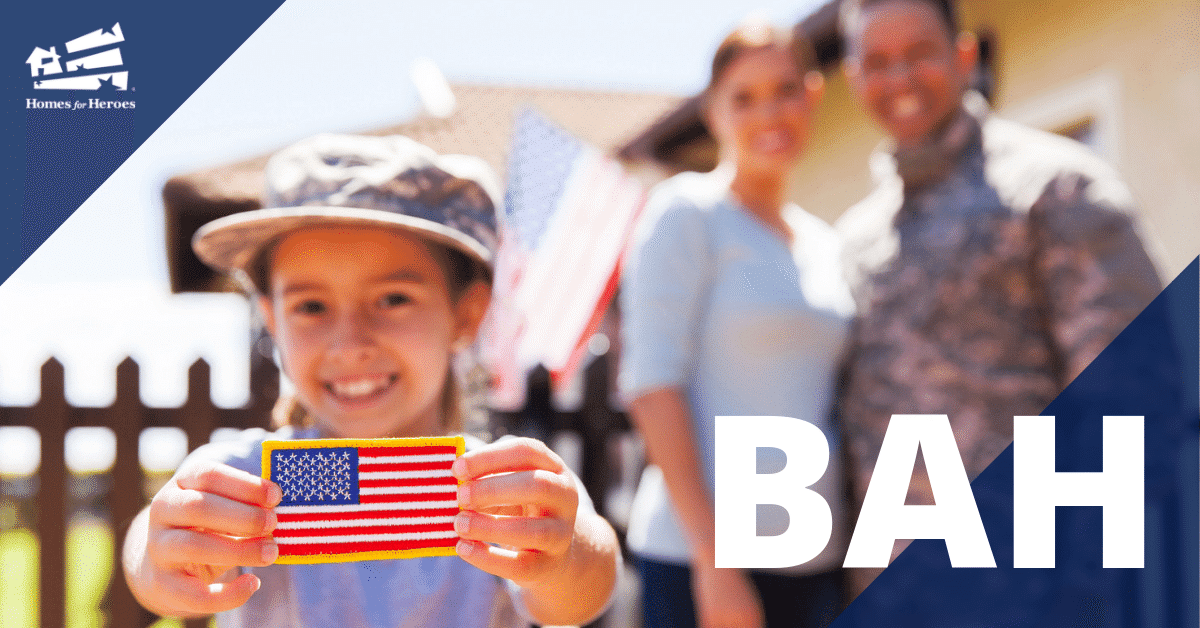 The United States gives its military members a Basic Allowance for Housing, or BAH. If governmental quarters are not available, the BAH provides military members with equitable housing compensation. The BAH you receive depends on the housing rates near your base, your dependency status, utilities, renters’ insurance and your pay grade. If those variables change at all in your area, there will likely be a corresponding change in your BAH rate. Here’s everything you need to know about BAH, a BAH calculator and significant savings on a home to help you.

How Long Has BAH Been Around?

BAH began in January of 1998, replacing the Variable Housing Allowance (VHA) and the Basic Allowance for Quarters (BAQ). Under the old allowance programs, service members were asked to self-report their housing costs in a survey each year. These survey results weren’t representative of the average housing costs, however, because some service members chose to live in housing that was substandard. The survey results showed them paying less for housing, which then lowered the BAH rate. The new BAH system instead looks at all the housing rates in the areas around military bases.

How Much of My Housing Costs Are Covered?

Service members living in rental properties that are below the median price range will have zero out-of-pocket expenses, and you might even take home some extra money each paycheck. If you choose to rent a median-priced property, you will likely have to spend a small amount over the BAH rate.

What if the BAH Rate Changes in My Area?

Thankfully, the Basic Allowance for Housing you receive is protected against rate decreases. That’s because of “individual rate protection,” which was passed by Congress over 10 years ago. If your status stays the same, even if the BAH rates in your area go down, the BAH you receive remains the same. If the BAH increases in your area, you’ll see a corresponding increase in your BAH.

What If I Move to an Area with Lower BAH Rates Than I Had Before?

While your BAH rate won’t ever decrease if you stay in the same location, if you move to an area with lower BAH rates, your Basic Allowance will also decrease to that level. Fortunately, your housing will cost less so you won’t be losing out on any funds.

Why Isn’t My BAH Covering My Mortgage Payment?

BAH rates change depending on the area’s rental rates, not housing prices. So, if you choose to purchase a house near your base, you will still get a BAH added to your monthly paycheck, but you’ll likely have some out-of-pocket expenses.

If you’re a military service member looking to buy a home and want to save money, register with Homes for Heroes today. There’s no obligation, and you’ll be automatically matched with a real estate or mortgage specialist in your area. They’ll be your dedicated partner throughout the home buying process and save you money along the way on things like commissions, title fees, mortgage fees and inspection costs. Heroes like you save an average of $2,400 when buying or selling a home with the help of our dedicated specialists.

Does My Spouse’s Income Change My BAH?

The Regular Military Compensation (RMC) is what affects your BAH rates and does not include the income of your spouse.

When Are BAH Rates Released?

The Department of Defense typically releases annual BAH rates between December 15 and January 1 of the following year. Data is collected each year from more than 300 military housing areas across the United States, including Alaska and Hawaii.

Starting January 1, 2019, the average BAH rate increased by 2.55%. However, BAH will now only cover 95% of a service member’s housing costs, down from 99% previously. This means military members will have to pay 5% out-of-pocket, which is expected to equal $66-149 per month.

Are There Estimates for 2020 BAH Rates?

According to the Department of Defense’s proposed budget for 2020, BAH rates would increase anywhere between 3.2% and 3.9%, on average. The actual amount won’t be finalized until the budgeting process is over and Congress passes a bill later this year.

What is a BAH Calculator?

A BAH calculator is used to determine your Basic Allowance for Housing rate. If you put in the year, your pay grade and the zip code of your station, you will get your estimated monthly BAH rate. If you have dependents, your BAH will be higher because you’ll need a bigger place to stay if your children live with you.

Does My Rate Change If I Have More Than One Child?

You will receive a higher Basic Allowance for Housing if you have dependents living with you, but your rate does not increase with each additional dependent. That is because the BAH rates depend on housing rates using comparable civilians and average family sizes.

What If I Live in a Different Zip Code Other Than Where I Am Stationed?

BAH rates depend on where you report to duty, not the location of your residence. That’s because the military wanted to dissuade service members from choosing their housing based on BAH. Without this policy, military members might pick a place further away from base just to receive a higher BAH. You could also choose a lower BAH area but end up with higher commuting costs. You can still choose where you want to rent or buy, as long as you understand that BAH rates depend on your station location. Check out the BAH calculator to estimate your amount.

What if I Am Stationed Overseas?

If you are assigned overseas, the Overseas Housing Allowance (OHA) helps you privately lease housing if on-base or government housing is unavailable. The BAH calculator cannot be used to determine this amount. This allowance helps over 55,000 military members living overseas every year. The OHA rates change according to the country you live in and are routinely updated based on cost data and fluctuations in currency.

If you’re looking to buy a house near your base, register with Homes for Heroes to start saving money. Use the BAH calculator to estimate your allowance. When you’re ready to buy a home, or sell your house because of reassignment, our specialists can save you an average of $2,400!