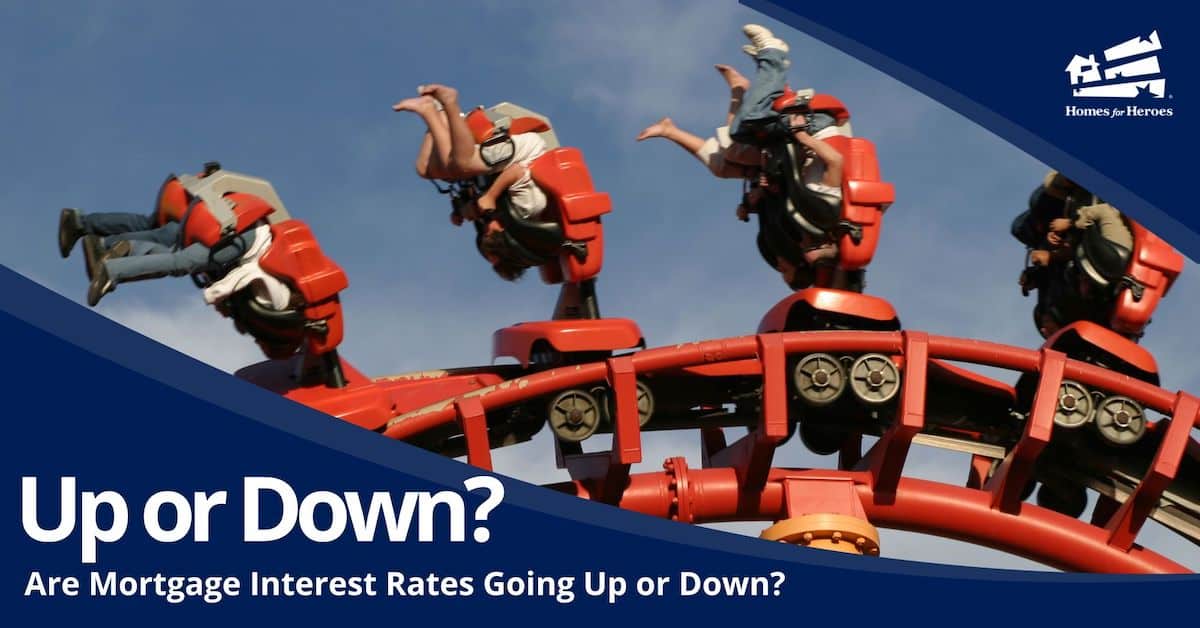 Now, as buyers ask, “Are interest rates going up?”, a closer look reveals they have moved higher over the past year, and have risen this month after several weeks of decreases. However, they remain low by historical standards. The mortgage rate environment in 2022 changed drastically from the previous few years, when borrowers enjoyed much lower interest rates.

During the COVID-19 pandemic, mortgage interest rates even hit an all-time low. In January 2021, the fixed-rate 30-year mortgage dropped to a new low of just 2.65%, according to data from Freddie Mac. This prompted a surge in new refinances and homebuyers looking to lock in their rate while the market was favorable.

However, the increased activity in the housing market amid other factors such as rising gas prices pushed inflation to new heights. Inflation reached a peak of 9.1% annually in June, marking a 40-year high. Since then, inflation has decreased slightly, but remains near historic highs, most recently dropping to an annual rate of 7.1% in November. Because of these high levels of inflation, interest rates have risen as the Federal Reserve works to bring inflation back down.

Are Interest Rates Going Up? No, Recently They Dipped!

Mortgage rates have more than doubled from their all-time lows hit at the beginning of last year, but have eased in recent weeks with slight decreases according to Freddie Mac. Currently, the average 30-year fixed-rate mortgage rate is averaging near the 6.5% mark, while 15-year mortgage rates are under 6%.

While this may seem high compared to last year, it is significantly lower than historical averages. In fact, the highest rate ever recorded for mortgage interest rates was 16.81% in 1981, according to Freddie Mac. Before the COVID-19 pandemic, in 2019, the average mortgage rate hovered near the 4% mark. At the time, this was considered historically low.

For homebuyers, today’s housing market could be a welcome relief even though mortgage rates are higher than last year. During the COVID-19 pandemic, homebuyers often fell into bidding wars, or had to offer significantly more money than the asking price in order to secure the home they wanted to buy. In one instance, a couple offered $100,000 over asking price on a home, and they were still outbid.

Since the competition has fallen significantly after mortgage rates began rising, homebuyers are facing less need to offer above asking price, and are having an easier time buying a home and securing a mortgage loan in today’s market. In fact, some even end up with a lower monthly mortgage payment on their home loan than they would have had last year.

Although rates are higher than last year, they are still historically low. And homebuyers who want to buy now can consider options to lower their interest rate such as a shorter mortgage term or even adjustable-rate mortgages (ARM). Getting pre-approved for a mortgage likely means having some money in your savings accounts and some investments like a 401k, your credit card balance is in check, and you’re maintaining a credit score ideally above 620.

Why are Interest Rates Going Up Versus Last Year?

We are seeing higher interest rates versus last year, but why? One of the top determining factors that answers why mortgage rates are going up is actions from the Federal Reserve. Ten times per year, fed officials from the Federal Open Markets Committee (FOMC) meet to discuss the current state of the economy including employment, inflation levels, GDP, recession risk and other factors. Using these economic indicators as a guide, the Federal Reserve voting members make changes to the Fed’s monetary policy to help steer the economy in a positive direction.

Some of the tools that the Fed uses in its decision making include:

The federal funds rate is the rate that U.S. financial institutions such as banks, credit unions and others in the Federal Reserve System charge each other for overnight loans of reserves deposited at the Fed. When the Fed makes the cost higher for banks to lend money, they then pass these costs on to the consumers through their own loans. Lenders offering credit products increase the cost of the loan, and start pushing mortgage rates up as well as interest rates on other loan amounts such as auto loans, credit cards, personal loans and more.

As the Fed continues to raise the federal funds rate, mortgage rates could continue to rise. But the federal funds rate isn’t the only factor in determining the direction of consumer interest rates. Other factors that investors watch can also affect mortgage rates, such as the risk of a recession. In recent months, as the risk of a recession increases, interest rates have wavered.

Are Mortgage Rates Going Up or Down in 2023?

Mortgage rates are trending downward, and could continue to fall in the months ahead even though the Federal Reserve continues to raise the federal funds rate.

Over the past month, mortgage rates have climbed from the low- to mid-6% range to start the year. But they are up a full 3.26 percentage points from last year.

Although they are currently trending up, Fannie Mae recently forecasted the average interest rate for a 30-year fixed-rate mortgage (FRM) will steadily decrease throughout this year, reaching 6% by the end of the year.

“The economy caught its breath in the second half of 2022, but that doesn’t change our expectation that it will run out of air in early 2023 via a mild recession,” said Doug Duncan, Fannie Mae senior vice president and chief economist.

“While uncertainty still exists, a growing set of signs, including an inverted yield curve, weakness in the Conference Board’s Leading Economic Index, and a slowdown of manufacturing activity, support our ongoing contention that the economy is likely to contract next year.”

Interest rates have increased slowly in recent weeks, but remain significantly higher than the beginning of last year. But as the Fed continues on its current course for further rate hikes this year, mortgage rates could increase before going back down.

Homes for Heroes Can Save You Money on Mortgage Lender Fees

Homes for Heroes helps firefighters, EMS, law enforcement, military (active duty, reserve, veteran), healthcare professionals and teachers; afford a home, even in a rising interest rate environment. When heroes work with Homes for Heroes local specialists to buy or refinance a home, they receive an average of $3,000 given back after closing. Take a moment to sign up today and speak with our local specialists. Get your questions answered and save good money when you buy a home or refinance a mortgage with our local specialists. It’s our way to say, thank you for your service to the community and our country.