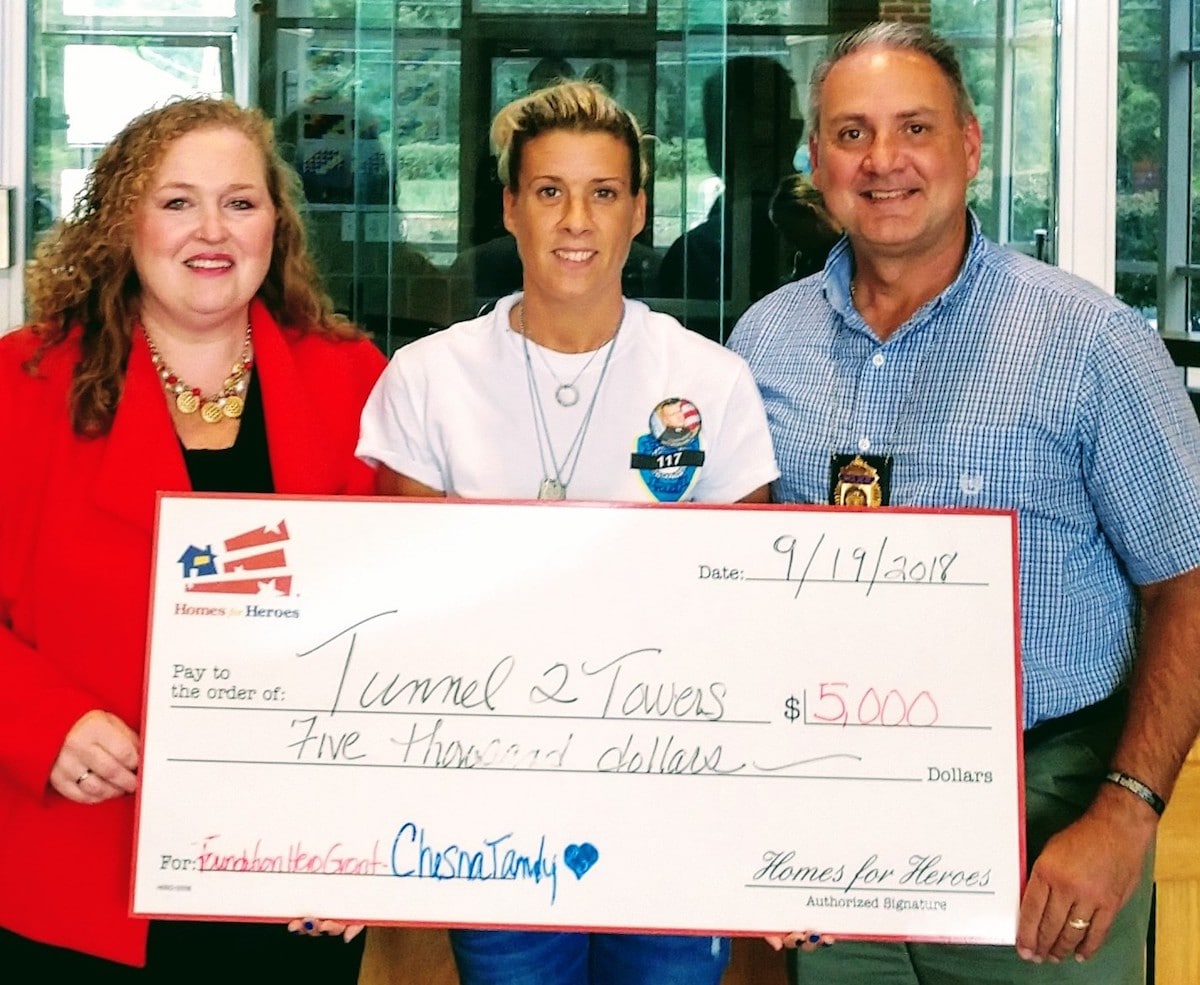 To support the family of officer Michael Chesna of the Weymouth Massachusetts Police Department, the Homes for Heroes Foundation provided the Chesna family with a $5,000 grant through the Stephen Siller Tunnel to Towers Foundation to help a first responder family pay off their mortgage and other expenses. As we remember the tragic events of 9/11 this month, we are honored to partner with the Tunnel to Towers Foundation to support Michael Chesna’s wife, Cindy (shown holding check with brother-in-law, Captain Comperchio of the Weymouth Police Department) and Michael’s two children.

Sgt. Dennis Keenan, of the Quincy Massachusetts Police Department, contacted his network of connections in the attempt to assist officer Chesna’s family. The Homes for Heroes Foundation received the message on August 16, 2018. Sgt. Keenan’s message reflected on officer Chesna’s dedicated service and the unfortunate circumstances leading to his last call:

On July 15, 2018, a Weymouth, Massachusetts police officer was murdered with his own gun by a violent felon who should have been in jail. Officer Michael Chesna was 30 minutes from finishing his midnight – 8:00 AM shift. Officer Chesna left his wife Cindy, daughter Olivia (age 9) and son Jack (age 4). Officer Chesna was a U.S. army veteran with the 10th mountain division, serving in Iraq and Afghanistan. He was awarded the Purple Heart after being wounded in Afghanistan. Mike Chesna survived Iraq and Afghanistan only to be assassinated on a Sunday morning in Weymouth Massachusetts — Sgt. Dennis Keenan

The Homes for Heroes Foundation, who provides grant money to local and national hero nonprofits to help support heroes who are in need of housing or emergency financial assistance, got to work and answered the call. 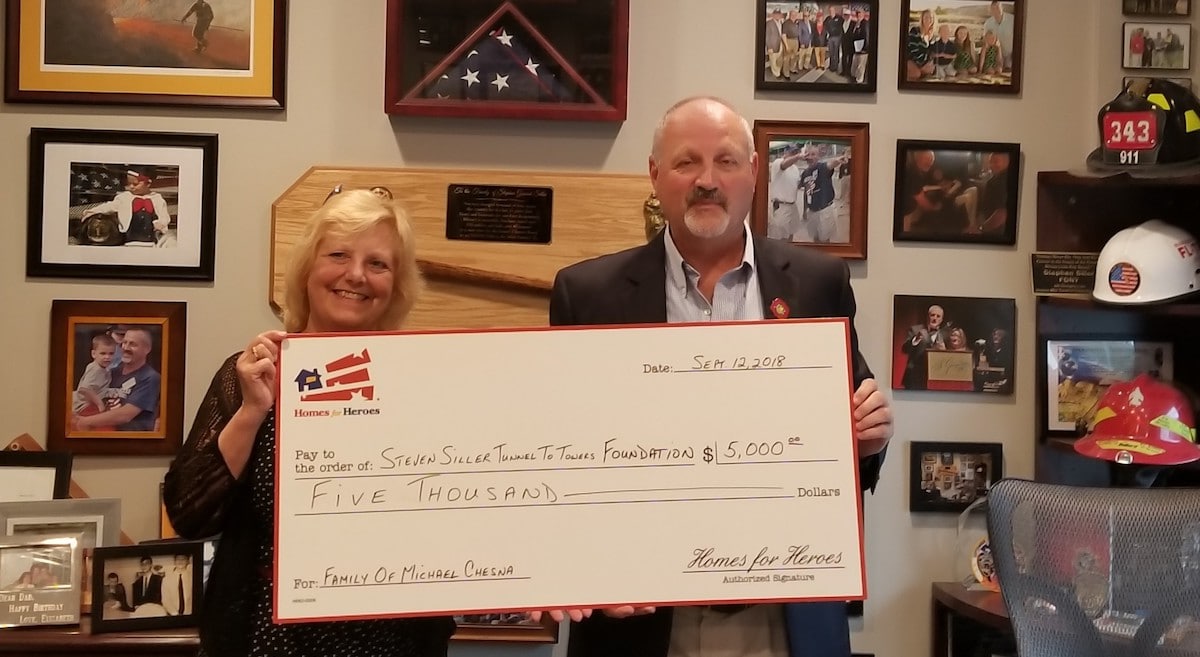 With the help of Homes for Heroes local real estate specialists, CindiLee McTiernan and Joyce Powers, and the Tunnel to Towers Foundation, a Homes for Heroes Foundation grant in the amount of $5,000 helped to pay off fallen officer, Michael Chesna’s family mortgage and other expenses as reported by CBS Boston, channel 4 WBZTV on August 23, 2018. The $5,000 grant was one of many donations made to the Tunnel to Towers Foundation that assisted the Chesna family.

The Homes for Heroes Foundation found a great charitable nonprofit partner in the Stephen Siller Tunnel to Towers Foundation, and their Fallen First Responder Home Program which is dedicated to helping fallen first responder families.

Stephen Siller is one name to come out of the tragedies of 9/11 that resonates commitment to serving others, and Stephen’s siblings continue to honor his name through the Tunnel to Towers Foundation.

On September 11, 2001, Stephen, was assigned to Brooklyn’s Squad 1 and heard the scanner report a plane hitting the North Tower of the World Trade Center. Upon hearing the news, he returned to Squad 1 to get his gear, and drove his truck to the entrance of the Brooklyn Battery Tunnel. The tunnel had already been closed for security purposes, so he strapped 60 lbs. of gear to his back, and raced on foot through the tunnel to the Twin Towers. Stephen gave up his life while saving others that day.

The Tunnel to Towers Foundation, and the Siller family, are committed to ensuring we never forget the events of 9/11, the sacrifices made, and those that continue to be made by our first responders in the line of duty. Through the Fallen First Responder Home Program, they support law enforcement, firefighters, and emergency workers that lost their lives under extraordinary circumstances in the line of duty. It is their mission to provide a support system for the surviving families.

Since 2014, Tunnel to Towers has provided over $7,000,000 to help the families of fallen first responders, including the family of Michale Chesna. Funds have paid off the mortgages on their family homes or set up trusts for their children to help with education, medical and housing needs.

Tunnel to Towers hosts an annual 5K Run/Walk every year in New York City to honor the sacrifice of firefighter, Stephen Siller, but also our military and first responders who continue to make the ultimate sacrifice for our country.

DONATE to the Homes for Heroes Foundation to help heroes in need of housing or emergency financial assistance.